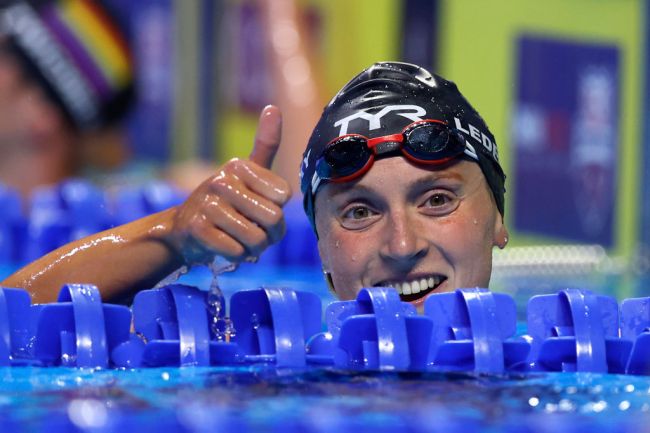 Katie Ledecky is considered one of the greatest, if not the greatest female swimmer of all-time at only 24 years old. As she competes in her third Olympic games, a big part of her preparation involves a kickboard that has a more storied career than the swimmer herself.

Ledecky, who used the postponement of the Tokyo Games to complete her degree from Stanford, qualified for the Olympics in three events. She will compete in the 200-meter, 400-meter and the inaugural 1500-meter freestyles.

To qualify for the latter two made for a grueling schedule at the Swim Trials in Omaha. Finals for the 200 and 1500 were just over one hour apart and required an all-out sprint, followed by a significant distance swim.

Her evening began with the 200-meter and she won by a body’s length over the second-place finisher.

When Katie Ledecky gets a lead, she doesn’t give it back 😤 #SwimTrials21 pic.twitter.com/OJdbluRk8G

Not two hours later, Ledecky came in nearly 11 seconds ahead of the next best swimmer and won the 1500.

WHAT HAVE YOU DONE IN THE LAST ONE HOUR AND 25 MINUTES?!

Katie Ledecky qualified for the Tokyo Olympics in both the 200-meter and 1500-meter freestyles. Casual 😤pic.twitter.com/8v7QdgSxgo

In between her two races, the NBC broadcast pointed out an interesting storyline— her kickboard.

Ledecky, born in 1997, uses a kickboard from 1992. It has been passed down through generations of legendary Olympic swimmers. Each of them share a common bond— they all swam for the Cardinal.

Janet Evans was the first to use the board. She swam for Stanford from 1989 to 1991. After the NCAA placed weekly hour limits on athletic training time, Evans left the team to focus on the Olympics.

At only 5-foot-5, she was often times competing against and beating much bigger athletes. She won a total of four gold medals in long-distance events at the 1988 and 1992 Olympics.

She was also the first to pass the board down.

Jenny Thompson was the next to warm-up using Evans’ kickboard. She swam four years at Stanford and amassed 19 individual and relay NCAA titles.

Her Olympic career began in 1992, alongside Evans, and she won two gold medals. She added three more in 1996 and capped her career with two silver medals at 31 years old in 2004. Her 12 medals, eight of which were relay gold, were the most for any female swimmer in history.

At the forefront of her success was the kickboard, which exchanged hands in 2004.

She ended up winning silver that year and missed out on the Olympics in 2008. The swimmer who beat her at the 2008 trials was ultimately disqualified, but the entry deadline had passed and Kirk missed out. It was a big deal.

Nevertheless, it was her turn to hand the board off.

Sam Woodward has her name throughout the Stanford record books. She won one NCAA titles in the 200 Free relay and two in the 400 Free relay. Despite her success, Woodward never qualified for the Olympics.

She gave the board to another impressive swimmer who never reached the Games.

Katie Olsen was an eight-time All-American at Stanford, but she never could breakthrough during the trials in 2008 or 2012.

Her successor was of similars status.

Julia Anderson was the most recent board-holder. She was a two-time All-American in the 800 Free relay in 2013 and 2014.

When her Cardinal career came to a close, she passed the board down to Ledecky.

Ledecky qualified for one of the toughest doubles in history on Wednesday. To go from an all-out 200-meter sprint and turn around to swim the mile in a matter of 60 minutes is insane.

While her dominance is clear, this summer will not be easy.

In the 1500, she owns the 10-fastest times in history. She is the heavy favorite.

However, in the 200 and 400, Australia’s Ariarne Titmas has emerged as the current favorite. Last weekend she swam the No. 2 times in history in both events.

Ledecky owns the world record in the 400, so she has the ability, but she will be tested. Perhaps the kickboard and its storied history will be the difference, giving her the extra juice she needs.