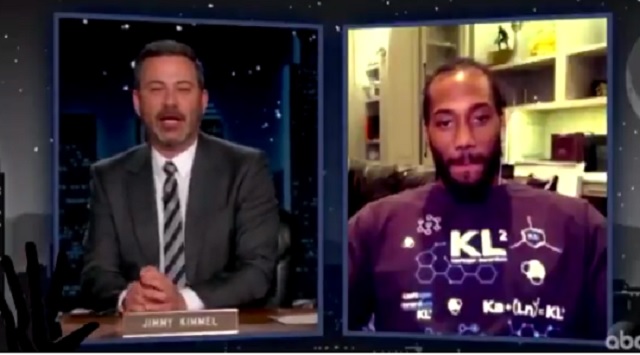 Noted “fun guy” Kawhi Leonard made an appearance on Jimmy Kimmel Live on Wednesday night to promote his new New Balance Christmas edition sneakers and he addressed that one rumor about his obsession with apples.

Last year, a rumor surfaced online that stated Kawhi brought 12 apples to a Spurs team dinner and ate them with a knife and fork while his teammates watched in shock.

Kawhi was asked about the rumor by Kimmel, and he said he had no idea where the story came from but did acknowledge that he owns an apple tree.

Kawhi Leonard denies the ‘Apple Time’ story where he supposedly showed up to a Spurs team dinner with 12 apples, ate them with a knife and fork, and didn’t order anything else 🤣#Clippers pic.twitter.com/ytHKGe4K2W

The New Balance Kawhi Christmas sneakers he promoted on the Kimmel show are currently available on NewBalance.com .