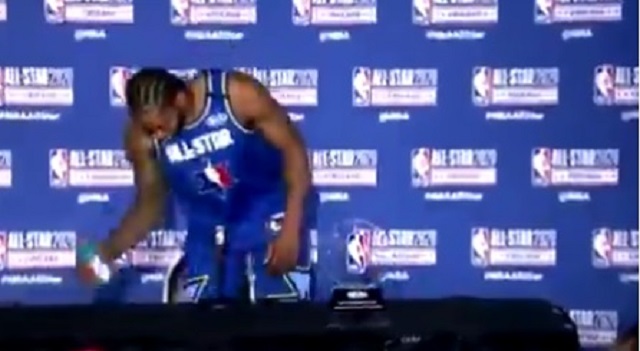 Kawhi Leonard had a huge All-Star weekend and he’s not going to let brands cash in on his likeness without paying him.

During the All-Star game, Kawhi released a new signature sneaker with New Balance and then went on to win the MVP of the game.

A few limited drops will release this Spring, with The Kawhi’s general release slated for Fall 2020.

After the game, Kawhi went to meet the media for the postgame press conference but when he saw a Gatorade bottle waiting for him he immediately grabbed it, put it under the table, and whispered “not sponsored by Gatorade”.

Kawhi Leonard sees that there is a Gatorade bottle on his interview table.

Immediately after: Removes bottle off table, and says "Not sponsored by Gatorade." pic.twitter.com/ulYoAXtm6T

Kawhi isn’t the only player to show his contempt for Gatorade. Warriors’ Klay Thompson, who is sponsored by Body Armor, has been known to slap Gatorade bottles off the table during postgame pressers.

Kawhi and Klay aren’t about that free clout.