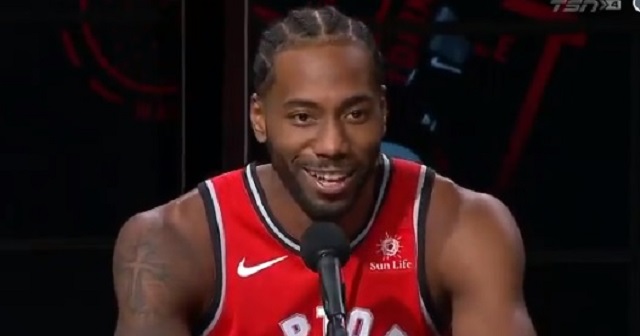 Kawhi Leonard is a pretty lowkey guy which made last year’s ongoing drama between he and the Spurs so bizarre.

According to several reports Kawhi was angry at his former team and their doctors for misdiagnosing several of his injuries.

eonard had told confidants that he did not want to sit down with Popovich and has been purposely difficult for the Spurs to reach recently. Among the issues, Leonard is angry over what he believes was the Spurs’ mishandling of a quad injury, and remains irate with public comments from teammate Tony Parker and Popovich that he felt were not supportive of him, league sources said.

Today, Kawhi made his first appearance in a Raptors uniform since forcing a trade from San Antonio and the whole thing was pretty weird.

The first question Kawhi was asked was about what he wanted the people in Toronto to know about him and this is how he answered.

I’m a fun guy, Obviously I love the game of basketball. I mean there are just more questions you have to ask me for me to tell you about myself. I can’t give you the whole spill. I don’t even know where you’re sitting at. (laughs)

While the answer was fairly routine everyone on the Internet couldn’t get over how bizarre Kawhi’s laugh sounded.

Kawhi laugh was a malfunction

Kawhi definitely has the laugh of someone that would kill you with zero conscience. https://t.co/plTemHyrAJ

My goodness, that laugh sounds painful! LOL, is it THAT hard to laugh Kawhi? https://t.co/SxUbiPthqK

I THINK KAWHI GOOGLED “HOW TO LAUGH” BEFORE THIS PRESS CONFERENCE pic.twitter.com/hfqUpACcna

Kawhi’s laugh confirms he is a robot https://t.co/KsiDf3F7vg