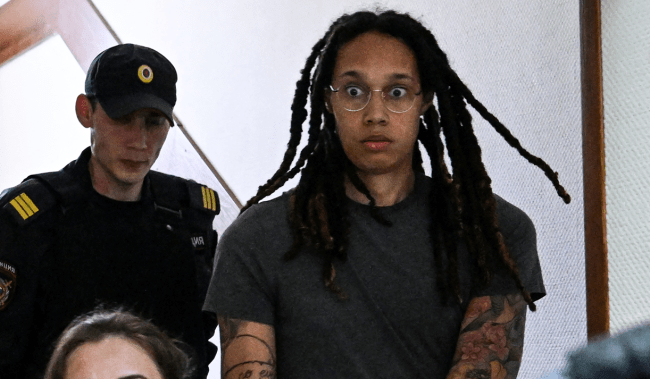 WNBA star and two-time Olympic gold medalist Brittney Griner has been detained in Russia for over four months after being arrested at the airport in Moscow on February 17.

The 31-year-old Phoenix Mercury center was charged with smuggling and transporting cannabis after vape cartridges allegedly containing traces of hashish oil were discovered in her luggage.

Her trial is expected to begin this Friday and the likelihood of her being acquitted of the charges against her a slim as Russian prosecutors have a 99 percent success rate, according to CBS News.

“There’s a bias mainly because the Russian judicial system says they really should not go to trial unless the defendant is going to be convicted,” William Pomeranz, the acting director of the Kennan Institute and an expert on Russian law, told the New York Times. “There’s no real idea or expectation that the defendant could be innocent. There’s no presumption of innocence, really.”

Griner’s detention has already been extended another six months and her trial is expected to take at least two months. Should Griner somehow be acquitted, in Russia those acquittals can be overturned. She has been classified by the U.S. government as “wrongfully detained” since April 29.

“We do not know at this point what evidence they have,” Pomeranz said. “We don’t know how many volumes of evidence they want to read into the record, but usually, in this type of case, it’s formidable and significant.”

Several media outlets, especially in Russia, have suggested that Griner is being used as a bargaining chip for a possible prisoner swap for Russian arms dealer Viktor Bout, AKA Merchant of Death, who is imprisoned in the United States for conspiracy to kill U.S. citizens, delivery of anti-aircraft missiles, and providing aid to a terrorist organization.

Instead of that exchange, sports and political commentator Keith Olbermann has another idea: put Russian NHL star Alex Ovechkin, who is a known supporter of Vladimir Putin, in prison here in the United States.

Olbermann made his suggestion in response to a video clip on Twitter of ESPN reporter T.J. Quinn stating that Russia is expected to convict Brittney Griner and sentence her to 10 years in prison for her alleged crimes as some sort of “negotiating tool.”

Olbermann’s suggestion was met with mixed reactions on social media.

Yeah that makes sense you clown🙄

No, we don't play that game.

I don't agree with everything you say Keith but this one pic.twitter.com/v3uvy9htWs

Vasilevskiy may be a more important asset at this point. Ovie is getting old and goaltending is precious