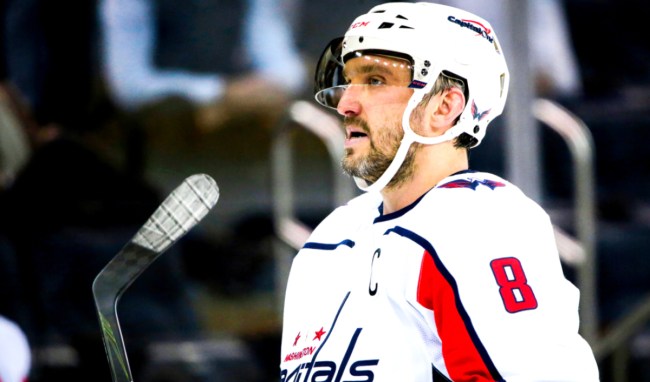 On Friday, when future Hall of Famer Alex Ovechkin was asked to comment on his home country of Russia invading Ukraine he spoke out against war in general, but wouldn’t go so far as to criticize President Vladimir Putin.

Ovechkin told the media when asked about the situation, “Please, no more war. It doesn’t matter who is in the war — Russia, Ukraine, different countries — I think we live in a world, like, we have to live in peace and a great world.”

However, when asked to comment on Vladimir Putin, Ovechkin replied, “Well, he is my president. But how I said, I am not involved in politics.”

On Saturday, Hall of Fame goalie Dominik Hasek, who is from the Czech Republic, fired back at Ovechkin on Twitter and he wasn’t kind.

“What!? Not only an alibist, a chicken s–t, but also a liar!'” Hasek tweeted in response to Alex Ovechkin’s comments on Russia’s invasion of Ukraine.

“Every adult in Europe knows well, that Putin is a mad killer and that Russia is waging an offensive war against the free country and its people.

“The NHL must immediately suspend contracts for all Russian players! Every athlete represents not only himself and his club, but also his country and its values and actions. That is a fact. If the NHL does not do so, it has indirect co-responsibility for the dead in Ukraine.

“I also want to write, that I am very sorry for those Russian athletes, who condemn V. Putin and his Russian aggression in Ukraine. However, at the moment I also consider their exclusion a necessity.”

Hasek also went to tweet in Czech that “all Russian athletes should be prohibited from competing in the Czech Republic. So even those who are already here. They represent not only themselves and the club, but also their country and its actions.”

He then added, “After some time to those who live here (have a visa) or are under prof. contract, accede and deal with individually. But now I unequivocally recommend a complete ban for every Russian athlete. Their country attacked a free democratic Ukraine for no reason.”

What!? Not only an alibist, a chicken shit, but also a liar! Every adult in Europe knows well, that Putin is a mad killer and that Russia is waging an offensive war against the free country and its people. The NHL must immediately suspend contracts(contin)https://t.co/BQnQaf76L7