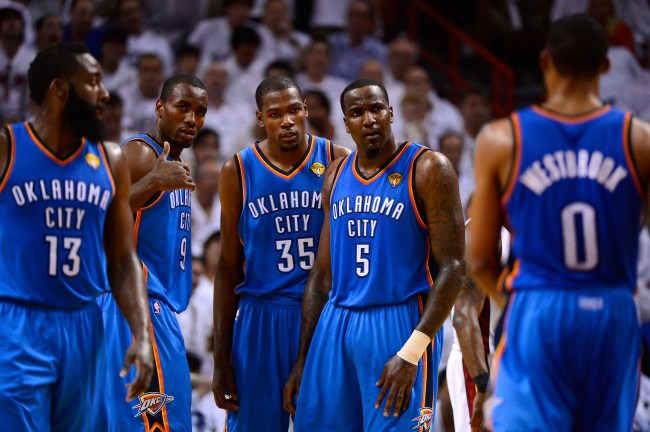 On Friday, former OKC Thunder big man Kendrick Perkins went on Showtime’s All The Smoke podcast and told the story of Harden played terribly when the team was in Miami during the 2012 NBA finals because he was out partying at strip clubs all week.

Ohhhh @KendrickPerkins saying on the latest All the Smoke that Harden sucked all of the 2012 Finals bc he was out at clubs the whole time 👀 I had heard there was more to the OKC contract extension talk other than just the money. Now there’s a specific example…

Houston fans don’t like me tweeting it, so here’s the clip for reference and also for proper credit. If you don’t already listen, Matt and Stephen are great! (Disclaimer: NSFW/language) pic.twitter.com/x03GMxR5dK

When we went to Miami we couldn’t get a win to save our life, Russ and KD came to play, I had a couple double doubles, Serge was doing pretty good but man James ain’t gives us shit and you know why. Motherfucker, King Of Diamonds caught a hold of his ass. In San Antonio he didn’t have a damn thing to do, when we got to Miami there was everything to do and you couldn’t get that motherfucker to buy a bucket in that motherfucker.

Now we know why Harden has struggled in the playoffs all these years.