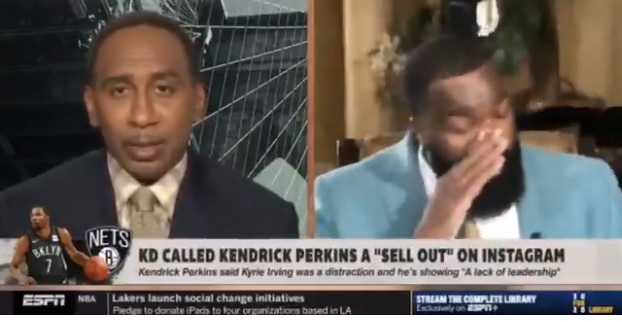 Earlier this week, Perkins was pretty harsh with his criticism of Nets guard Kyrie Irving, who had been trying to get players to sit out the season.

Judging by his deleted tweet, perk knows more. So maybe yall should chill until the entire story comes out. Kyrie mightve done some shit that hasnt come out yet. pic.twitter.com/NLRUC9pAJk

Durant backed Kyrie and called his former teammate Perkins a “sell-out” on Instagram over his ESPN rant.

.@KDTrey5 was quick to respond to @KendrickPerkins. 👀 pic.twitter.com/LR7wG4E1DH

On Friday, an emotional Perkins went on ESPN’s ‘First Take’ and responded to KD by reminding his former teammate about the time they both cried inside a hotel room in 2011.

An emotional Kendrick Perkins responds to Kevin Durant calling him a sell out pic.twitter.com/4xmrC1sE5y

Let me remind you, the same sell-out that’s sitting right here, I remember this day like it was yesterday, May 8th 2011. Mother’s day, you and I in Memphis Tennessee, going through personal problems and guess what? You came to my room, we vented, we cried together, we cried some more, we didn’t leave that room until we confided in each other…so for you KD to call your brother a sell-out, c’mon dog, you know what my love is for you

Perkins was so emotional that he had to wipe away tears from his eyes during his appearance of ‘First Take’.