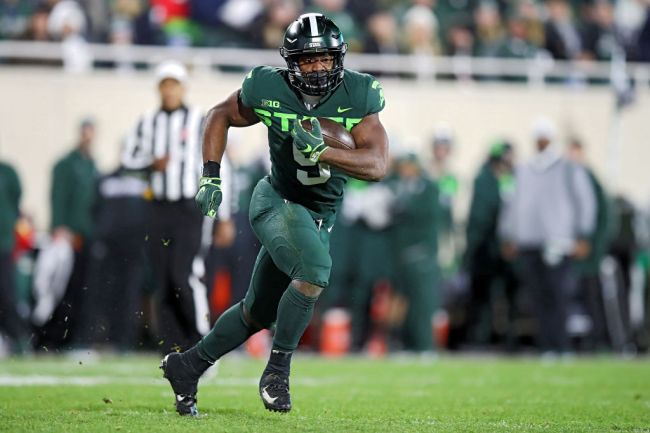 Kenneth Walker III was the best running back in college football last season and finished sixth in Heisman Trophy voting. Despite a record-breaking season at Michigan State, the former three-star recruit had to wait until the second round to hear his name called in the NFL Draft.

Part of Walker’s wait was because of how the league values running backs in 2022. Part of it was because of a concern that he can’t catch passes out of the backfield— which is critically important in a passing league.

Over the course of his one year in East Lansing, Walker averaged 136.3 yards per game, won the Big Ten rushing title, and finished the season ranked No. 2 in the FBS and No. 1 in the Power 5 in rushing yards per game (136.3) and total rushing yards (1,636). As a result, he was named the Walter Camp National Player of the Year and won the Doak Walker Award.

Despite his impressive year, NFL Draft analysts raised red flags about his ability to catch the ball. He caught only 19 passes between his three years at Wake Forrest and Michigan State, with only 13 in his lone season with the Spartans.

Here is what some of NFL Draft analysts had to say about Kenneth Walker III’s pass-catching:

There are all kinds of other examples of doubt toward Walker’s receiving skills. It was the biggest question about his play coming out of college.

In the first look at Walker from the Seahawks’ voluntary workouts, whether intentional or not by the social team, Seattle quickly quieted the talk. The very first video that was posted of Walker in Washington shows him catch the ball with one hand out of the backfield.

Obviously, catching a pass against air is not a direct representation of how Walker will fare as pass-catcher in-game. However, whether intentional or not, it’s pretty ironic and rather funny that the team showed him catching passes after that was all anyone could talk about as a negative entering the draft.