Kentucky Fans Clown Louisville For Losing Out On No. 1 Recruit After Hiring His Granddad On Staff 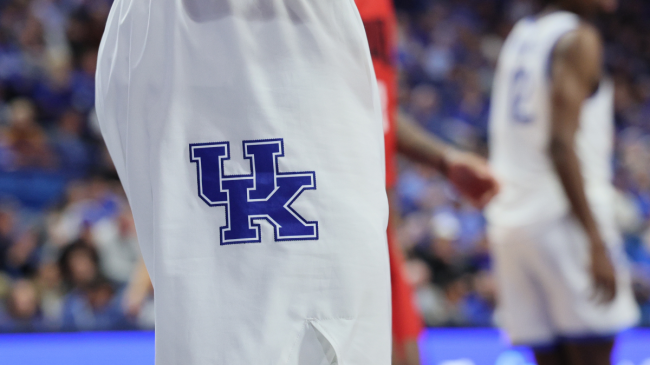 The rich got richer in Lexington, Kentucky as John Calipari put a bow on the nation’s top 2023 recruiting class. No. 1 overall prospect DJ Wagner committed to play for the Wildcats on Monday, giving the program another gem in a stacked cycle.

Kentucky’s class now boasts four of the top 10 players from the high school ranks, as well as a four-star recruit, helping Coach Cal continue his unmatched recruiting success. It’s far and away the top group in college basketball, giving Calipari and Co. the pieces needed to go on a championship run.

The Wildcats have the No. 1 ranked recruiting class.

Wagner is the best of the bunch, ranking as the top overall player for 2023. The combo guard from New Jersey is a consensus five-star prospect who chose the Wildcats over suitors like Louisville and Memphis. Given Kentucky’s rivalry with the Cardinals, many fans celebrated the win over their in-state foe.

One desperate tactic used on Louisville’s part to try and land the talented guard has Wildcats gloating a bit more than they typically might.

The Cardinals hired DJ Wagner’s granddad to be a part of the athletic staff in an attempt to strengthen their standing. New head coach Kenny Payne named Milt Wagner as Director of Player Development and Alumni Relations in May. The hire might’ve made the race a bit closer, but it ultimately wasn’t enough to land Wagner’s commitment. In fact, he never even visited the Louisville campus, taking trips to only Kentucky and Memphis.

This isn’t something new. In fact, it’s not even the first time Wagner’s granddad has been hired to land a top prospect. Milt’s son, Dajuan, was the top player in the 2001 class. This, at a time when John Calipari was still coaching at Memphis.

Calipari hired Milt to join the staff, subsequently landing the commitment of his son to the Tigers. Dajuan would go on to have a successful one-year career at Memphis before becoming a first round NBA draft pick. While it worked for Calipari back then, it backfired for Louisville with DJ.

And losing out on a recruit after hiring a family member is never a good look. Kentucky fans trolled their rival on social media after landing Wagner’s pledge.

One fan wrote, “Louisville in shambles again,” after missing out on the nation’s top recruit. Another posted, “Louisville is such a trash program that his grandpa being there wasn’t enough.”

This person joked, “Lol… oh, Louisville. Maybe you should have hired his mom, too.” Awful optics for the Cardinals.

It seems nothing’s gone right for UL since the hiring of Kenny Payne at the helm. The Cards are off to an 0-2 start to the 2022 season, dropping one-point decisions to Bellarmine and Wright State.

Hopefully things turn around quickly for Payne and Co.