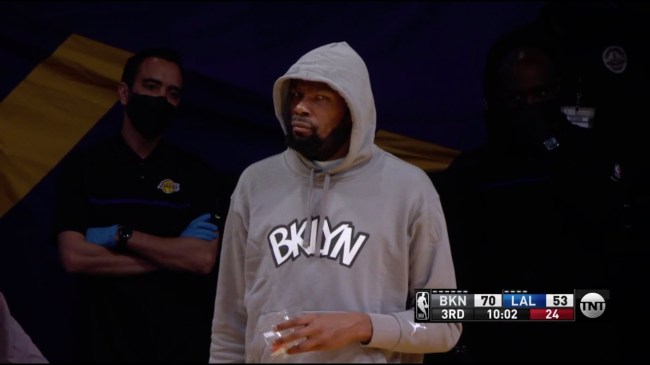 Kevin Durant has a bone to pick with ESPN’s Jackie MacMullan.

Earlier this week, MaCMullan went on the Bill Simmons podcast and claims she had a conversation with Durant in which she got the impression that he wanted to win three championships in Brooklyn to secure his legacy.

Jackie MacMullan on Kevin Durant’s desire to leave a legacy in Brooklyn:

“I do think in talking with him, his genuine goal is to win three championships in Brooklyn.” pic.twitter.com/w6DAn0e9kU

“I do think, in talking with him, his genuine goal is to win three championships in Brooklyn and make that his place, his team, his legacy,”

Durant, who is active on Twitter, fired back at MaCMullan and claims that he never had a conversation about wanting to win three championships in Brooklyn with her.

Once again, I don’t even talk like this…plus I don’t have a relationship with Jackie for us to have in depth conversations about my intentions as a basketball player. I get she plays an opinion based sport but she framed this like we are friends. We are not.. https://t.co/0D2GszSwhA

This is the second time in the past month Durant has accused an ESPN reporter of lying about him.

A couple of weeks ago, KD called out Jay Williams for claiming Durant had said not to ever compare him Giannis at a Christmas party.

Mans will do anything to advance their careers in this media shit, wanting to be accepted by an industry that will dispose of you whenever they please. Keep me out all that corny ass talk about whos better and legacy and all that dumb ass shit. I don’t even talk like that