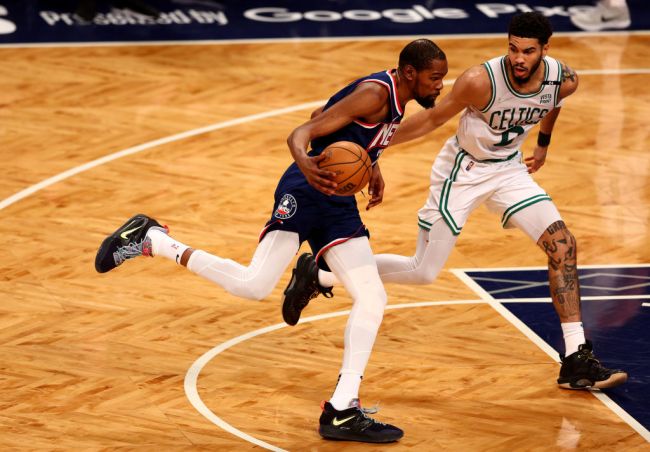 It’s been a rough few days for Kevin Durant. On Saturday, he was shockingly ineffective against the Boston Celtics, scoring only 16 points as the Brooklyn Nets fell behind 3-0 in their first round playoff series.

That disappointing performance led to Durant drawing criticism from Charles Barkley for being a “bus rider” during the seasons where he won a championship and not winning as a “bus driver”.

Durant has since been eliminated from the NBA Playoffs last night in spite of a performance that saw him rack up 39 points, 9 assists, and 7 rebounds. The loss has, of course, kept the criticism coming for Durant and teammate Kyrie Irving.

Today, Durant fired back at Barkley over the “bus rider” comments with some posts on his Instagram account.

"Where would Chuck be without the big homies"

Durant makes an interesting point here. For as much as Barkley criticizes Durant for his bus riding, you could argue that Barkley utilized his bus pass even more during his NBA career. Barkley was drafted by the 76ers just a couple of years after they won a ring and the team was still led by Julius Erving and Moses Malone.

Barkley got a few years to ride the bus before having to take the wheel, a luxury Durant was not granted. Durant also led his first team to an NBA Finals appearance as the bus driver while Barkley didn’t make a finals appearance until he joined a Phoenix Suns squad that had won 53 games the previous season.

Barkley then proceeded to join Hakeem Olajuwon and Clyde Drexler in Houston a couple of seasons after they had won back to back rings. He never made it past the conference finals in Houston.

It looks Kevin Durant is going to put up a better fight against the idea of him being a “bus rider” than the Nets put up against the Boston Celtics in the playoffs.