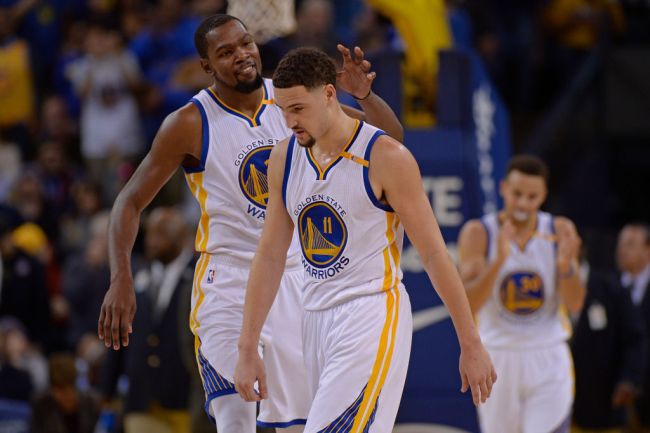 After missing two consecutive seasons with ACL and achilles injuries, Klay Thompson is targeting Christmas Day for his return. The 31-year-old Golden State Warriors guard may still be more than 100 days away from stepping back onto the court in a regular season game, but he’s already back in the gym putting in the work.

Despite not playing in more than 800 days, Thompson is still a bucket. He posted a recent workout on his Instagram live and knocked down what appears to be 10 straight three-point shots.

However, one of Thompson’s former teammates doesn’t agree with the total. He is calling it nine threes.

Kevin Durant noticed something about workout session and took to twitter to let it be known. It appears as though Thompson’s foot is on the line for the first shot and Durant made sure to call out the “toe jam.”

If anyone knows a thing or two about when a foot is on the three-point line, it’s Kevin Durant. He and the Brooklyn Nets may have missed out on the NBA Finals because Durant’s shoes were too big and his foot was on the line.

Additionally, Durant knows what it’s like to battle back from a torn Achilles. The former teammates won back-to-back championships together in 2017 and 2018.

Durant tore his achilles during the 2019 Finals and Thompson last November. Thompson, who does not appear to have lost his shot, should look to his friend and former teammate for guidance on how to return to form— even if he is jabbing him for stepping on the line.