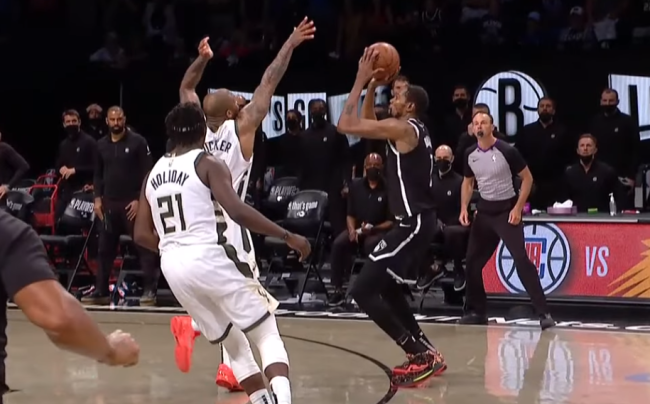 Basketball is a game of inches and unfortunately for Kevin Durant, the way that he likes to wear his shoes on the court may have contributed to the team’s 115-111 overtime loss against the Bucks in game 7.

On Saturday night, Durant made an incredible shot near the three-point line while down two points to tie the game and send it to overtime.

Durant’s foot was touching the three-point line during the shot which is why the basket only counted for two points. You can see how close Durant was from eliminating the Bucks in the pic below.

While speaking to the media Durant said he thought he had won the game with the shot but then saw that his “big ass foot” stepped on the line.

Kevin Durant said that he initially thought his shot at the end of regulation was a three.

"But my big ass foot stepped on the line," Durant said, in part. "I just saw how close I was to ending their season with that shot."

After the game, ESPN’s Royce Young recalled that Durant once told NBA writer Chris Herring that he wears a full shoe size larger when he plays basketball compared to his actual shoe size.

Did you know: KD actually wears a full size bigger in games than his actual shoe size. From @Herring_NBA’s 2018 story about why KD’s shoes fall off all the time: pic.twitter.com/kKo2gthZR8

damn KD was a shoe size away from winning the series 😭😭 pic.twitter.com/HmeELxWOEv