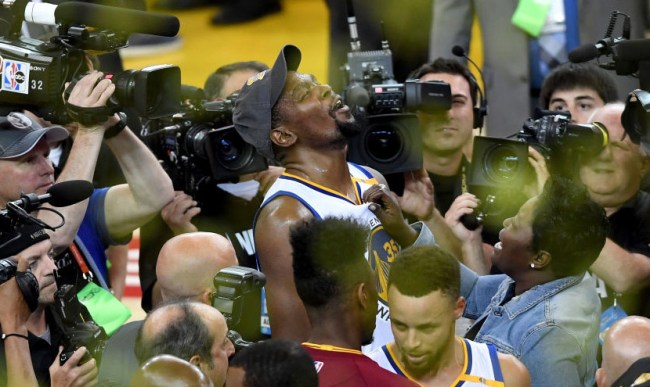 Kevin Durant, who has had an unusual sort of relationship with Rihanna over the years, had one final parting message for the singer slash Cavs fan after he finally won his first NBA championship.

Early on in the series Rihanna, who appears to be a bit obsessed with LeBron, yelled “Brick” at Durant who then proceeded to trash talk her after hitting a three.

However, that wasn’t the pair’s first interaction as we dug up some old Durant tweets in which he mentioned Rihanna numerous times and were were borderline creepy.

So as Durant was exiting Oracle Arena Monday night heading out to party with the team, the subject of Rihanna once again came up.

“I ain’t got to say nothing,” said Durant who then proceeded to say the opposite of nothing.

“Love you, girl, but I got to do it! Gots to do it! You understand me?!” Durant shouted at the camera while holding his NBA Finals MVP trophy.

Not sure if this was before or after Durant committed the ultimate party foul.

He totally still wants to marry her by the way.

That girl @rihanna RT @AyeDerBaba94: @KDTrey5 So my question is… If you could marry any girl who would it be?? RT

Check out the full video below…

Annnd then this happened…

Kevin Durant got out of his car to celebrate with Warriors fans (via @anthonyVslater, @NBA) pic.twitter.com/7UBCAcGCyQ