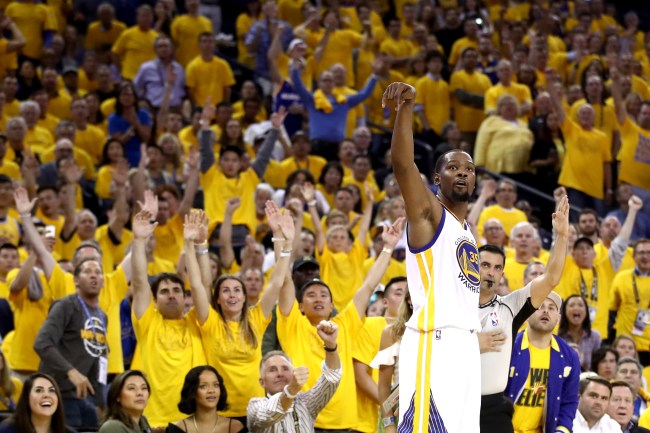 Kevin Durant got the best of Rihanna last night. His Warriors beat her beloved LeBron James convincingly in Game 1 of the NBA Finals, 113-91. KD stuffed his stat sheet with a dazzling 38 points on 54% shooting, 9 rebounds, and 8 assists.  He was good. But, Rihanna, an avid LeBron James fan, hijacked the story lines from Game 1 of one of the most anticipated Finals in recent memory by being an absolute fangirl court side.

The Barbados beauty now famously yelled ‘BRICK!’ while he was shooting free throws, put Jeff Van Gundy in a trance that prohibited him from doing his job, and even bitterly cursed out a Warriors fan after the game. She was unhinged.

Durant is now three games away from his first NBA championship in his decade long career, and the only peace his nemesis Rihanna has until Game 2 is to revisit these wildly thirsty tweets from Kevin Durant back in 2011-2012, when he was just a mere mortal in the league. Now that he is one of the most famous athletes in the world (#8 to be exact), I bet KD is wishing he didn’t shell out these tweets basically begging to sniff Rihanna’s hair.

Somebody get @Rihanna to wish me a happy birthday and I'll be good..ya understand

That girl @rihanna RT @AyeDerBaba94: @KDTrey5 So my question is… If you could marry any girl who would it be?? RT

Looks like KD’s got a little more confidence now.

Rihanna needs to be court side at every game for the rest of the Finals. Absolutely mandatory.