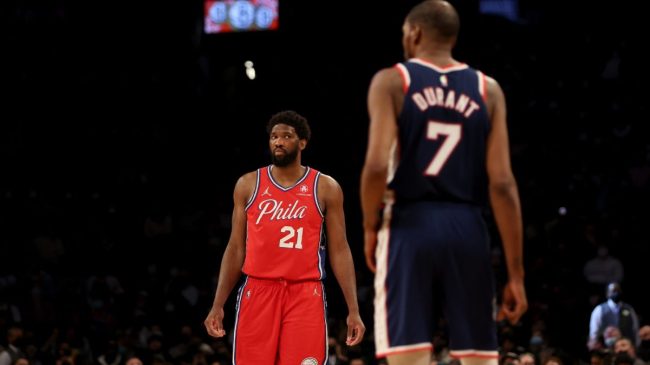 The NBA MVP decision is coming down to the wire.

It appears that the nomination has become a two-man race. Those two players are last year’s MVP, Nikola Jokic, and Philadelphia’s Joel Embiid.

Embiid seemed to have a commanding lead midway through the season, but his stock has dropped since the 76ers’ trading of teammate James Harden.

Over that time, Jokic has pulled ahead with his late season performance helping the Nuggets secure the six seed in the playoffs.

As it stands, the Denver center closed with -275 odds while Embiid came in at +250, according to BetMGM. Both were well ahead of third place candidate Giannis Antetokounmpo.

While it looks like the award is now Jokic’s to lose, one Nets’ superstar believes that Embiid should be the MVP.

Kevin Durant believes that Embiid should be the MVP.

Embiid has been one of the most efficient scorers in the game this season, but Durant believes it’s not necessarily his play that will hold him back from winning the award.

KD said his pick for MVP would be Joel Embiid. As for the narrative aspect of the MVP race — as it pertains to votes, Durant knows it’s out of Embiid’s control. “In Joel’s case, more people like Giannis and Jokic. It’s as simple as that.”

“In Joel’s case, more people like Giannis and Jokic. It’s as simple as that.”

Embiid can have a combative personality on the court, at times. He, too, has said that the voters “hate him” compared to the rest of the candidates.

We’ll see if he’s able to overcome the aversion and land an MVP in 2022.