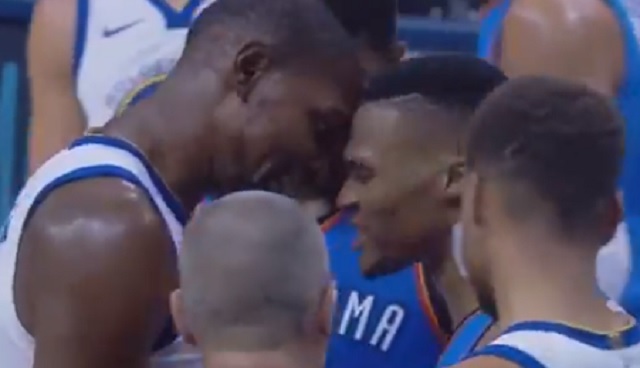 It might be time to officially lock Russell Westbrook and Kevin Durant in a room and let them duke it out.

Before tonight’s Thunder-Warriors game both Durant and Westbrook tried to downplay the significance of Durant’s return to OKC even though we all know that both players hate each other.

Russell Westbrook:
“It really don’t matter who we have next at this point,” Westbrook said from practice in OKC. “It’s really about us, man. I think regardless of what other teams do, we know if we play the way we’re supposed to play for 48 minutes, it’s hard to beat us, and that’s all I worry about is our team.”

Despite whatever bullshit front both players put on before the game things got pretty heated quickly on the court as Westbrook talked trash throughout the game at Durant.

Things got so heated that Durant got into Westbrook’s face in third quarter and straight up called his former teammate “a pussy”.

Kevin Durant to Russell Westbrook "You're A Pussy" pic.twitter.com/pb9nSaNlW7

I KNOW Kevin Durant did not just call Westbrook a pussy

Kevin Durant had the nerve to call Westbrook a "pussy." I don't think Durant has looked in the mirror lately

It seems like Durant’s return has fueled Westbrook because he’s currently crushing the Warriors by scoring over 30 points in three quarters. I really hope these two teams meet in the playoffs because you can feel the tension when both Durant and Westbrook are on the court.