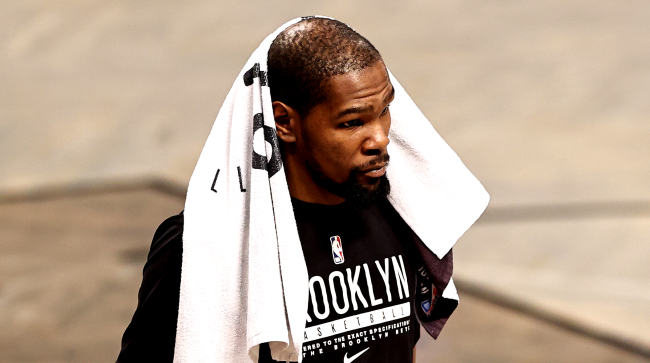 If there is one thing we have learned about Kevin Durant over his many years in the NBA it is the fact that if you say something publicly about him there is a very good chance that he will know about it, and very often react to it.

There may not be anyone in sports who is more willing to interact with those he feels may have slighted him.

He’s not always in the right, but this week, in the case of his latest beef, this time with Shannon Sharpe, he most certainly is.

On Monday’s edition of Undisputed, Sharpe talked about a quote that Durant made in which he said if he beat LeBron James in the NBA Finals, and LeBron is considered to be the GOAT, then what does that make him?

Just one problem. Durant never said that. (1:36 mark below)

It’s easy for Kevin Durant to say that now b/c he has the titles. The titles put his mind at ease.

If KD felt like that in the beginning, he would’ve never left OKC to link up with a team that went 73-9 & had some of the greatest shooters to ever live. pic.twitter.com/au82sjXHuW

Of course, Durant got wind of this and called out Sharpe, referring to him as a “drunk uncle” for his faulty research.

The internet quickly located the fake Kevin Durant quote that Sharpe may have been discussing.

Looks like Sharpe got duped by this fake quote pic.twitter.com/Us9QOEIxfN

This now makes two people in the media who have gotten fooled by that quote.

I got poor information this morning relating to a statement that was thought to come from @KDTrey5 . It was a fake tweet by a kid and it wasn’t true. I apologize & own this mistake. I have to be better and will be.

Whoever made that quote up is certainly getting a lot of mileage out of it.

Sharpe did not respond to Durant on Twitter, nor has he admitted is mistake. He’s probably saving it for his show. Stay tuned.

Ole Shannon refuses to respond to me. Yo Shannon why are u using your platform to push fake quotes about me???