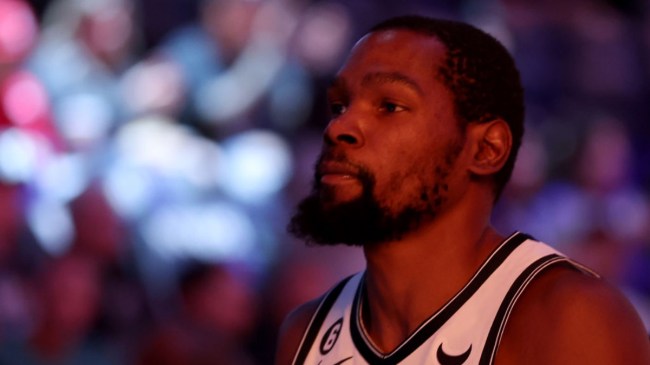 The Brooklyn Nets are a mess right now. Kyrie is out because of his off-court issues. Ben Simmons is once again missing games because of an injury and his teammates aren’t happy with him.

Now Kevin Durant has given his real thoughts on the situation with the team and what led to his trade request in an interview with Bleacher Report’s Chris Haynes.

Look at our starting lineup. Edmond Sumner, Royce O’Neale, Joe Harris, [Nic] Claxton and me. It’s not disrespect, but what are you expecting from that group? You expect us to win because I’m out there. So if you’re watching from that lens, you’re expecting us to play well because No. 7 is out there.

I’m sure this won’t go over well with Durant’s teammates, but he’s not wrong. Kevin Durant is averaging just over 30 points and 5 assists per game for the Nets so far this season. The only other players on the roster averaging double digit points are Kyrie Irving and Nic Claxton and Kyrie isn’t even available right now for the Nets.

The team is currently 6-9 and Durant is just about the only reason the team has even been that good. Unfortunately, that’s what happens when you can’t afford to surround your star with talent because over $70 million of your cap space is invested in 2 players who have rarely been available in recent years.

In the same interview, Durant referenced that lack of talent around him as a reason why he wanted to be traded this offseason.

So when we’re all playing like s–t, you know the one person they’re going to look at. That’s why I requested a trade.

It’s hard to blame him for wanting out with the way things are going this season.