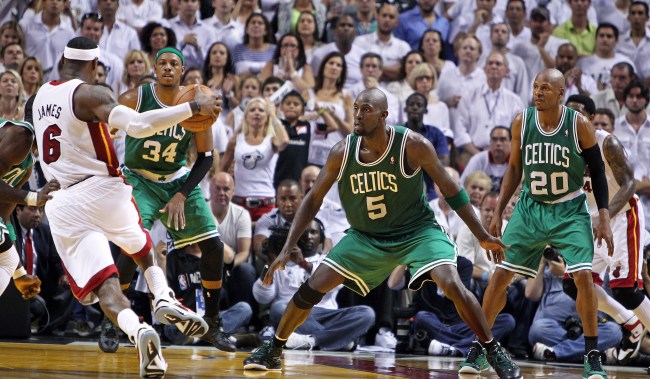 Kevin Garnett is on my Mount Rushmore of Favorite Athletes of All-Time. My AIM screen name growing up was MattKG21. My high school basketball number (humble brag) was 21. I owned his T-Wolves jersey (in blue and black) and I couldn’t even point to Minnesota on a map.

When he came to my Celtics, it felt better than sex. Or so I’m told.

I’ve stood behind KG through it all. Like when he ruthlessly called Charlie Villenueva, who suffers from a skin disease that prevents hair growth, a ‘cancer patient.‘ I deluded myself to take his word when he said he meant a cancer to his team. I convinced myself it was inspiring when he yelled into a microphone “Anything is possible!” directly after winning the 2008 NBA Finals, a weird and self-serving plug for Adidas.

But this shit. This shit here, man. This ain’t it.

“We broke LeBron. So get your a** out of here with that.”

KG says he and the Celtics ran LeBron out of Cleveland 😳 pic.twitter.com/yur51eq6Rn

I do genuinely love how KG still views the Heat’s Big Three as the enemy. That’s the cold-hearted shit that made me fall in love with him to begin with.

But from someone who was at Game 6 of the 2012 Eastern Conference finals at the TD Garden in Boston, a game in which LeBron executed one of the greatest playoff performances in NBA history (45 points, 15 rebounds and 5 assists, shooting 19-of-26), to say you “broke” him is not only disingenuous but delusional.

If I run my tongue along the roof of my mouth, I can still taste LeBron’s balls seven years later. I paid a week’s paycheck for those bleacher seats too. That game solidified LeBron in my mind as the most impressive physical specimen I had ever seen. And keep in mind, I bore witness to Brian Scalabrine in his prime.

So as much as I wanted to fight for KG’s honor in the wake of these comments, I simply could do nothing but waive the white flag.

This is KG right before the interview pic.twitter.com/P0H3NHAa03

I’ll be the first to admit that KG, as the youths say, is speaking out of pocket.