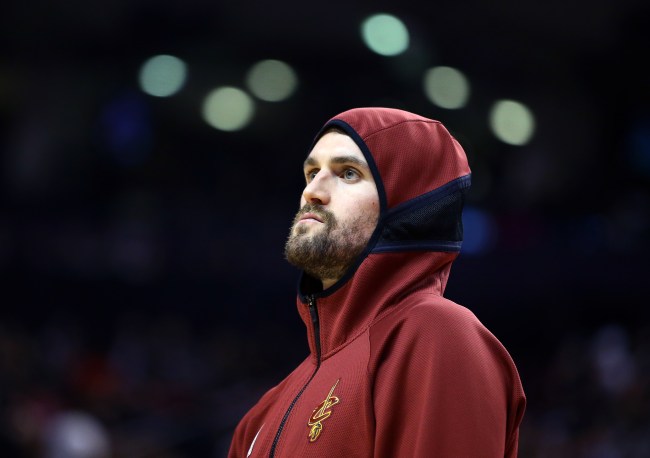 The back half of Kevin Love’s NBA career can most appropriately be compared to a college kegger.

Love showed up to the party with LeBron, the most popular guy in school, ran the pong table with Kyrie, crushed a few Foster’s with Dellavedova, smoked some cigs with Mosgov, laid  pipe with J.R. The ultimate. All was well.

But eventually, Love’s buddies started pairing up with sorority girls or just going home to retire for the night, and he was left the scraps–the people who were too drunk to find the front door, freshmen who finally got their turn on the pong table, the girls with puke dribbling down their chin, and Travis, completely sober, playing Ed Sheeran on an acoustic guitar to an empty room.

Love’s frustration with being the only cool guy who overstayed his welcome has officially boiled over.

And here’s Love publicly dressing down Colin Sexton in the middle of a game for some reason.

Kevin Love has absolutely had it with Collin Sexton 😳 pic.twitter.com/lib6gql0mx

After the Cavs fell to 10-24, Love expressed the way he felt in another manner.

The Cavs are now 10-27 and reside in the basement of the Eastern Conference. They stink. They will not get better. But Kevin Love did his best Joker impression by putting on a smile and telling reporters that he’s been acting like a petulant child.

Kevin Love cleared the air this morning and admitted his mistakes in showing frustration on multiple occasions. What do you make of his comments? #Cavs pic.twitter.com/spo7aZHXAC

Well that’s nice, Kev. But you’re not even halfway through this nightmare of a season. We’ll see how long you can hold this smile.