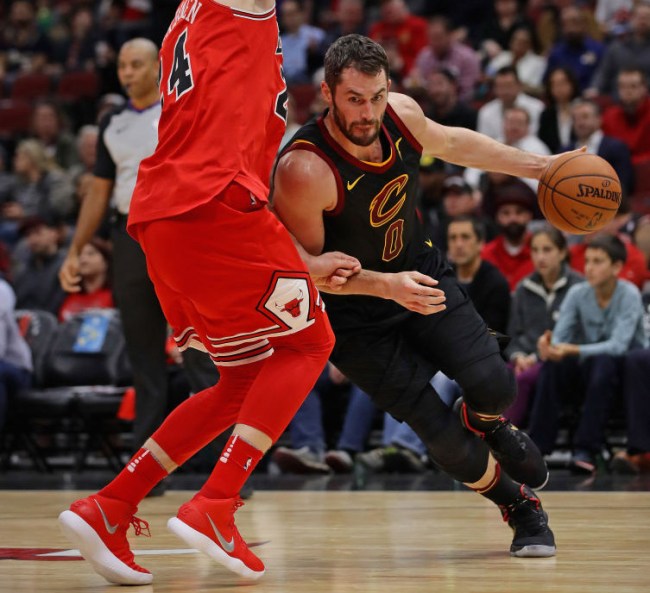 From all indications, Cleveland Cavaliers big man Kevin Love seems to have a pretty amazing life. He’s a five-time All-Star, won an NBA championship, won a gold medal at the 2012 Summer Olympics, and has been in a long-term relationship with gorgeous Sports Illustrated swimsuit model Kate Bock.

However, as is quite often the case with mental health issues, especially with men, looks can be very deceiving.

It was just a little over a week ago that Toronto Raptors’ All-Star DeMar DeRozan revealed how much he has struggled with depression and anxiety despite his enviable status as a successful NBA player.

And now today, Kevin Love also revealed in a story for The Players’ Tribune that he too has been suffering from mental health issues that got so bad he actually had to leave a game, miss practice, and be accused by his teammates of faking the flu, when in fact he was really suffering from panic attacks.

I’ve never been comfortable sharing much about myself. I thought about mental health as someone else’s problem. I’ve realized I need to change that. https://t.co/355HcQw3Ei

On November 5th, right after halftime against the Hawks, I had a panic attack.

It came out of nowhere. I’d never had one before. I didn’t even know if they were real. But it was real — as real a broken hand or a sprained ankle. Since that day, almost everything about the way I think about my mental health has changed.

He then goes on to explain that just like many people before him, oftentimes men, he tried to just shrug it off.

So for 29 years, I thought about mental health as someone else’s problem. Sure, I knew on some level that some people benefited from asking for help or opening up. I just never thought it was for me. To me, it was form of weakness that could derail my success in sports or make me seem weird or different.

Then came the panic attack.

It happened during a game.

That’s when Love started to realize that, yes, he did need some help.

After halftime, it all hit the fan. Coach Lue called a timeout in the third quarter. When I got to the bench, I felt my heart racing faster than usual. Then I was having trouble catching my breath. It’s hard to describe, but everything was spinning, like my brain was trying to climb out of my head. The air felt thick and heavy. My mouth was like chalk. I remember our assistant coach yelling something about a defensive set. I nodded, but I didn’t hear much of what he said. By that point, I was freaking out. When I got up to walk out of the huddle, I knew I couldn’t reenter the game — like, literally couldn’t do it physically.

Love says his heart was racing and he felt like he was about to die, the classic symptoms of a panic attack, which can scare the hell out of someone if they don’t know what’s happening. Love didn’t know what was happening. Not even after a visit to the Cleveland Clinic where they ran tests and determined there was nothing physically wrong – another common occurrence for anyone who has suffered a panic attack.

He left the hospital relieved he was healthy, but still had one nagging question, “Wait … then what the hell just happened?” Then, after he returned to the court he had another question, “Why was I so concerned with people finding out?”

It was a wake-up call, that moment. I’d thought the hardest part was over after I had the panic attack. It was the opposite. Now I was left wondering why it happened — and why I didn’t want to talk about it.

Call it a stigma or call it fear or insecurity — you can call it a number of things — but what I was worried about wasn’t just my own inner struggles but how difficult it was to talk about them. I didn’t want people to perceive me as somehow less reliable as a teammate, and it all went back to the playbook I’d learned growing up.

Love, who now sees a therapist, admitted that DeMar DeRozan’s comments were one of the reasons he decided to come forth with his story. He says he had no idea DeRozan was also dealing his own anxiety issues, but realized that those comments and his writing about his own story might help take some of the power away from the stigma of discussing mental health.

Love closed with one very important message (the entire article is well worth a read) to all those who are struggling, “So if you’re reading this and you’re having a hard time, no matter how big or small it seems to you, I want to remind you that you’re not weird or different for sharing what you’re going through. Just the opposite. It could be the most important thing you do. It was for me.”

Those in and around the sports world have since applauded Love for sharing.

You’re even more powerful now than ever before @kevinlove!!! Salute and respect brother! ✊🏾💪🏾🙏🏾 https://t.co/6nL6WoZMCm

Prolly the first thing I have ever read I can relate too 100% S/o to @kevinlove for this Must Read https://t.co/pK44B1knm0

So impressed by @kevinlove and @DeMar_DeRozan. It takes serious courage to share your inner struggles with the world. Once again, athletes are showing that they can be leaders in countless ways. ❤️💪🏿 #WeWillNeverShutUp https://t.co/v0XJpoQVzQ

I commend @kevinlove for being vulnerable. Speaking openly abt his struggles & owning it is one of the most empowering things a person could do not only for others but also for themselves. #TrustTheProcess https://t.co/QtGmQAECaC

Really strong read: @KevinLove on the @PlayersTribune, talking about how he got over his stereotypes about mental health & therapy, and addressed his panic attacks. "Everybody is going through something" https://t.co/aXjHni5BfI

Can’t be easy to open up the way Kevin Love did. He knows by doing so he is helping so many others who think they’re alone. https://t.co/Hz6vWzbZoW

Kevin Love once said that to himself to put off what he was going through…then he got the courage to get help. Good on him for sharing his story: https://t.co/CGNUnwvrNM

This is worth reading and very true. Respect to @Kevinlove for sharing about what we all go through as people in this world. https://t.co/g9r6Zaqpt9