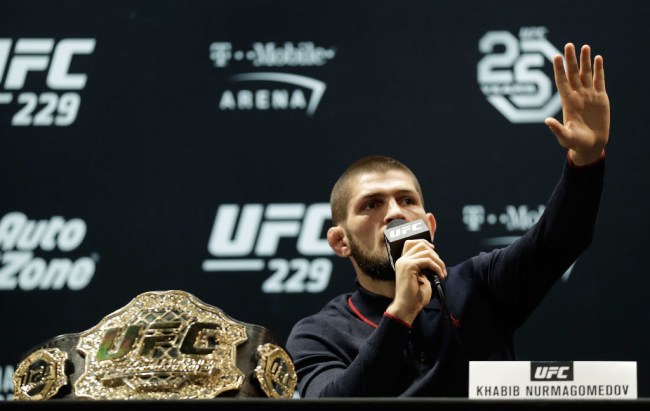 The name Khabib Nurmagomedov is so recognizable after his monumental win over Conor McGregor at UFC 229 that I can almost spell his last name without Googling it.

McGregor vs. Khabib reportedly shattered the previous UFC record for pay-per-views sold of 1.65 million, headlined by Conor McGregor vs Nate Diaz II at UFC 202. Dana White told TMZ on Monday that the PPV numbers for Saturday’s fight were well over 2 million. When tickets went on sale in August, the company reported the second-largest live gate in MMA history.

Point is, if you didn’t know who Khabib Nurmagomedov was before Saturday night, you certainly do now. His face has been plastered all over the internet, his post-fight shenanigans made into viral memes, ya know, the works.

But, just hours after Khabib won the historically popular fight, almost nobody recognized Khabib at the Las Vegas airport. That or they were intimidated by a guy who was fearlessly willing to throw hands with the entire T-Mobile Arena.

I was at the airport with Khabib Nurmagomedov less than 24 hours after the biggest win of his career. Only a couple of people recognized him. It shouldn’t have been like that but his postfight actions overshadowed making Conor McGregor tap as he predicted.https://t.co/b5sG25MAbE pic.twitter.com/c9625DYPkc

As Khabib Nurmagomedov got on the Terminal 1 tram at McCarran International Airport on Sunday morning, he blended in with all the other travelers making their way back home after a weekend in Las Vegas.

No one bothered him as he zipped up his signature K.N. hoodie with his nickname, “The Eagle,” on the back and put on his black UFC backpack. Nurmagomedov was less than 24 hours removed from winning arguably the biggest fight in UFC history, but he walked through the airport unnoticed despite an outfit that screamed, “Hey, I’m a UFC fighter!”

He almost seemed surprised when someone asked for his picture near his gate before he returned to being an inconspicuous traveler waiting for his flight to board.

It’s difficult to attribute the lack of people approaching the fighter to them not recognizing him. The dude has only lost one ROUND in 27 matches. He could put me in the hospital with a strong gaze. I can’t be risking my well-being for a few social media retweets.