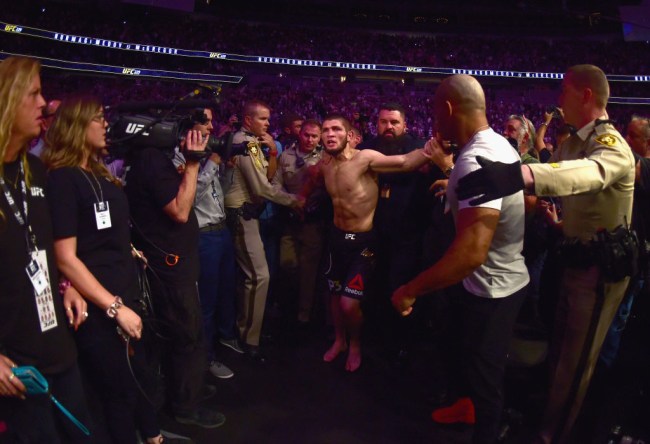 You know that feeling when you’ve egregiously disobeyed the rules growing up, like getting bagged stealing a handle of Smirnoff vodka from your parents and filling it with water before putting it back? You’re stomach is doing backflips the whole day because you know the reckoning is coming when your dad gets home from work, and because the vodka is turning your insides into a spin cycle. You hear the garage door open. You are overcome with the urge to pack up your shit and leave this life behind.

That is what Khabib Nurmagomedov is probably feeling, the irony being that the undefeated Russian fighter just beat the most prominent figure in the entire sport in a four round drubbing. Khabib received a congratulatory call from Putin, but his own father won’t be as flattering.

In his post-fight presser, the 30-year-old said “I know my father going to smash me” for attacking one of McGregor’s cageside friends, Dillon Danis, after he reportedly hurled racist abuse at him during the fight.

That’s no excuse in the eyes of Abdulmanap Nurmagomedov, The Eagle’s coach, mentor, and father, who said the punishment he’ll impose against his son will be far “tougher than the UFC.”

“You do whatever you want in the Octagon. Outside, there’s children, women, strangers. My team has always been famous for discipline,” he said. “So the sanctions against Khabib will be tougher than the UFC.”

Nurmagomedov Sr. displayed immense restraint prior to UFC 229, with McGregor calling him a “quivering coward” and his son a “mad backward cunt.”

In an Instagram post after the fight, Abdulmanap Nurmagomedov has said that he has put the insult behind him and forgiven McGregor.

“I forgive Conor McGregor for what he said,” he wrote.

“It is necessary to analyse what happened in the past and learn lessons from it. We have decided to move to other heights. I hope this is a blessing. InshAllah.” [via Independent]

Shenanigans aside, that fight was so goddamn entertaining and I need a rematch like I need air to breathe.

P.S. I would NOT fuck with Nurmagomedov Sr. now, or ever.