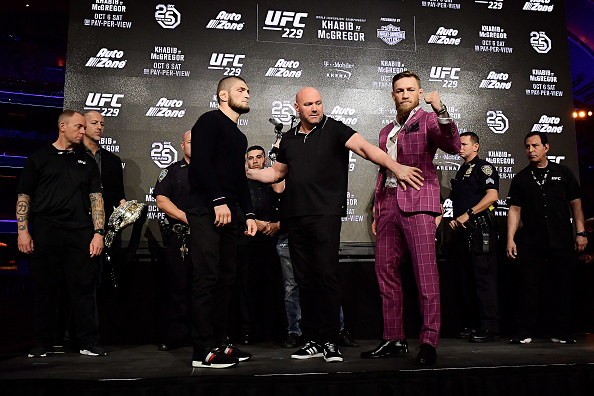 Before UFC 229, the UFC used footage of Conor McGregor’s bus attack in Brooklyn in their marketing videos to promote the fight.

Following UFC 229’s now infamous brawl, several people have criticized the UFC’s decision to use the bus attack in their hype videos.

I am not justifying Khabib’s actions, but the UFC advertised Conor’s attack on the bus with the dolly and they basically ignored Conor’s whole incident and used that as their own marketing scheme, though it injured other fighters. I’d be pissed if I was Khabib too.

I would say that this fight was a really bad marketing by @ufc promoting @TheNotoriousMMA and @TeamKhabib showing the bus attack, this should never be part of the marketing,promoting street fight, that’s what u get, people think it’s cool to fight now and disrespect people’s

Now that it’s all said and done Nurmagomedov says he has a strong suspicion that the UFC may have helped McGregor stage the bus attack to help generate interest for the fight.

Let me tell you how that all played out,” said the Dagestani fighter.

“I had a team of about 20 men. We had a bus just like that, hired (for us) to go to the gym, press conferences all the media activities and so on.

“But you know what’s interesting – on that day the UFC told me that on that media day I had to arrive alone. So I was traveling with all the other fighters who would fight from the red corner. I was in the red corner as well as a favorite. With me there was only one person (from my team) and my manager

“And if you watch the footage, you can see that the bus almost gets to the gate, and then suddenly it stops and pull back. Why? If you see that some people are attacking the bus, then you should keep moving and get outside (from the parking lot). But then you stop and pull back. Why? For me there are a lot of questions. I don’t know whether the UFC made it all on purpose or not.

“But they started to attack (the bus), break (windows). It was a crowd of around 20 men. Inside (the bus) we had three security guards. And as you can see (in the video), there were security guards outside as well, trying to stop Conor. In my opinion, I give 70 percent that it was a set-up.

I wanted to get outside, and all the fighters who were in the bus, already confirmed it in their interviews, as well as all the managers. It all happened in about one or two minutes. I don’t know, but this incident leaves a lot of questions for me,” said Nurmagomedov.

Nurmagomedov also points out that McGregor came to the arena with a large crew of about 20 people but was never stopped or questioned by arena security.

And one more thing. It was Barclays Center, a big arena for 20,000 spectators. How did they find out where exactly we were? It’s for one. For two, when around 20-30 furious men entered the arena, the UFC staff didn’t ask any questions? Conor wasn’t part of that media day. They should have informed the (arena’s) security that 20 to 30 men had just entered the building. They didn’t say anything. Instead they led them to our bus. You know some people think that I am just an athlete. But I am an educated man, and during 15 years of my career I have never even been knocked out. So believe me, my brain works well,” concluded Nurmagomedov.

According to MMA Junkie the UFC has declined to comment on Nurmagomedov’s claims.