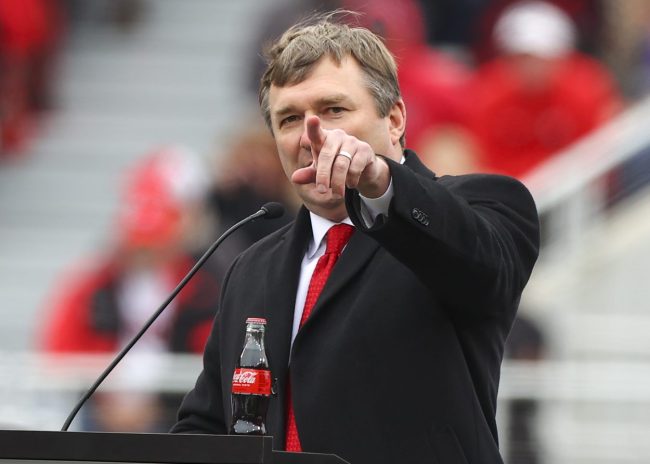 With the open recruiting period coming to a close on Friday, it’s the most wonderful time of the year— Kirby Smart helicopter tour season. Less than a month after winning the CFP National Championship, the Bulldogs’ head coach has hit the recruiting trail hard.

Well, he flew over the recruiting trail, at least.

Every year for the past few years, instead of driving across the state of Georgia or flying across the country, Smart hops in a helicopter and makes the most of his time. It’s efficient and time conducive.

No matter where he is going, it is quite the spectacle. Smart lands anywhere from a parking lot to the 50-yard-line of the football field, gets out and marches his way into the school.

It is a grand entrance, to say the least.

He did the same thing a week later.

ICYMI: If you're trying to impress a HS football recruit, landing a helicopter on their school's front lawn is a pretty good start!

That was the case yesterday as #UGA HC Kirby Smart paid a visit to @lehighsenior coaches in hopes of impressing star RB @richardyoung239. @NBC2 pic.twitter.com/CWeGaS9B8J

And then at another visit, he landed in the outfield of the baseball field.

Rolling in on a helicopter, he’s hard to miss.

And when he pulls up, everybody goes out to meet him.

It’s quite the spectacle.