After His Epic Win Over The Formidable Giants, Kirk Cousins Received A Phone Call From… President Trump? 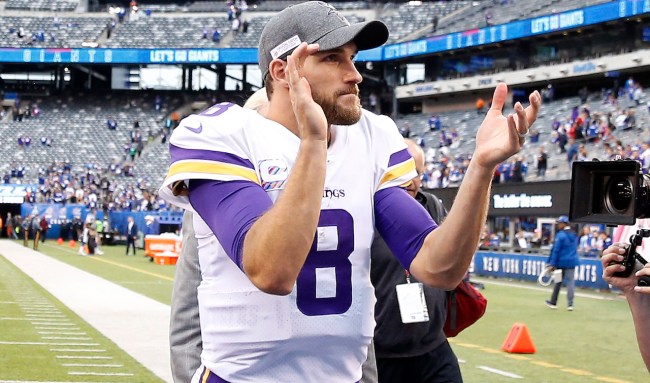 (Narrator: the win was not epic and the Giants are not formidable.)

When it comes to being divisive, Kirk Cousins and Donald Trump can probably relate, because similar to the President of the United States, the Minnesota Vikings quarterback is likely despised by at least half of the American public.

Whether it be his obnoxiously fat and undeserved contract or his inability to defeat decent teams, NFL fans across the country just seem to love to hate on Kirk Cousins. As Dave Chappelle once famously said about Donnie Treason, I’ve never felt more American than when we all just sit around hatin’ on that motherfucker.

But I digress back to Sunday, where these two icons of faking-it-until-you-make-it crossed paths for… well, I’m not sure why.

According to Minnesota Vikings beat reporter Chris Tomasson, President Trump reached out to Cousins following his victory of the truly indomitable New York Giants to “briefly congratulate him and the Vikings on the win in New York,” according to a White House spokesperson.

Uhhh… okay? I didn’t see Donnie Tax Return hit up Sam Darnold to congratulate him on not being a virgin after he came down with mono. Whatever happened to equality in this country?

“I just called him on the bus heading to the airport and I didn’t know. I was just calling the White House and they said, ‘Hold for the president.’ It was just a 30-second call saying congratulations. … Very out of the blue. Very random,” Cousins said.

“When the president calls, I don’t care who it is, left, right, whatever, down the middle. And if he says call me, I’m going to give him a call and see what he wants.”

As for why the President of the United States has the time or desire to phone an average quarterback whose career win record is below .500 is beyond me, but then again, I gave up on trying to figure out Donnie Two-Timer’s logic years ago (although, it is perhaps worth mentioning that President козырной is holding a campaign rally in Minneapolis on Thursday).