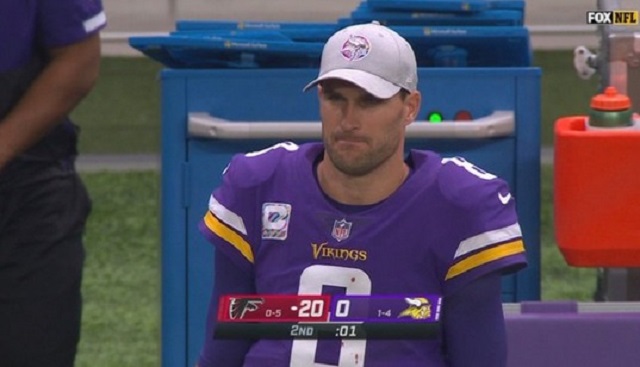 Minnesota Vikings QB Kirk Cousins is one of the highest-paid QBs in the league but unfortunately, he’s having a pretty rough year.

Cousins started off Sunday’s game vs the Falcons by throwing an interception on the very first play of the game.

Kirk Cousins only needed one drive to throw his first INTo f the game.pic.twitter.com/bJBktGvGp4

Cousins went on to throw two more interceptions before the end of the half.

Kirk Cousins just threw his 3rd interception of the first half. His 10 INT of the season. Ugly.

Cousins, who now leads the league in interceptions with 10, got roasted by NFL fans for his performance.

Kirk Cousins has 10 interceptions in his last 5.5 games.

Bro I was wrong about Kirk Cousins he woke up feeling DANGEROUS today…..it’s only halftime and my dude is going OFF

Kirk Cousins makes his way to the locker room at the half: pic.twitter.com/beHkEgO2th

Kirk Cousins really finessed the Vikings out of a 84 million, fully guaranteed contract just to do things like this. Grand larceny https://t.co/yga4Uyh2BH