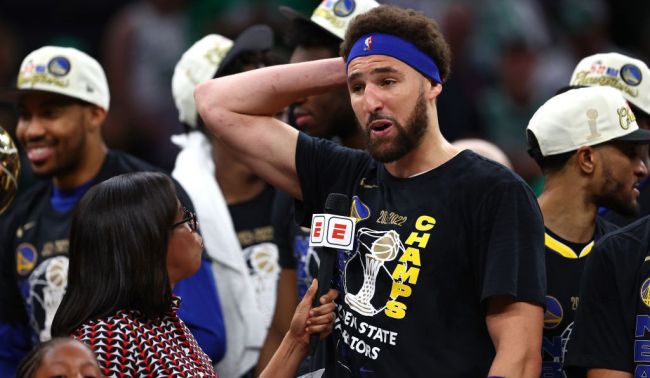 Klay Thompson, who was clearly enjoying himself during the Golden State Warriors victory parade as he was seen drinking Hennessy straight from the bottle, was caught on camera knocking over an unsuspecting woman after stumbling into her.

To his credit, Thompson immediately made sure to help the woman up and see if she was alright. Luckily, both the unidentified woman and Thompson came out of the collision unscathed.

Earlier in the day, Thompson was seen drinking the notorious brandy Hennessy straight from the bottle:

Klay isn’t the only member of the Golden State Warriors having himself a day, as Draymond Green — predictably, of course — has been a walking headline in and of himself, dropping F-bombs every chance he gets.

Thompson and the rest of the Golden State Warriors spent Monday celebrating their fourth NBA title in eight seasons. During the 2022 NBA Finals, Thompson — playing in his first season following back-to-back serious injuries — averaged 17 points, three rebounds, and two assists per game against the Boston Celtics, who the Warriors beat 4-2 after dropping Game 1 of the series at home.

The title marks the Warriors’ fourth in eight seasons and their first since 2018. After losing both Kevin Durant and Klay Thompson to injury during the 2019 Finals, Golden State spent the next two seasons rebuilding. In 2020, they were the worst team in the NBA with a record of 15-50, and in 2021, they were eliminated in the postseason play-in game. This year, however, third-seeded Dubs beat the Denver Nuggets, Memphis Grizzlies, Dallas Mavericks, and Celtics en route to their latest title.