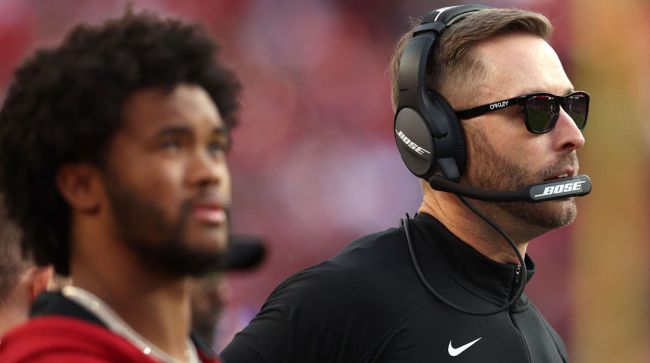 Earlier this week, the Arizona Cardinals and quarterback Kyler Murray came to a contract agreement that made the 4th-year signal caller the second-highest paid player in the National Football League, behind only two-time defending MVP Aaron Rodgers.

Given that Murray has yet to win a postseason game as a professional, many NFL fans were skeptical of the mammoth deal he was rewarded with. One person who appears to have no reservations, though, is Cards head coach Kliff Kingsbury.

During a recent interview on The Dave Pasch Podcast — which is hosted by Cardinals radio play-by-play announcer Dave Pasch — Kingsbury spoke about Murray’s new deal and said he believes that on his day, he doesn’t know if there’s a QB in the league that’s better.

“The contract deal — I feel really good about. I know he’s our future here. The talent is generational in what he can do running with the football,” Kingsbury said, via Ryan Sanudo of SI.com. “Each year you look at the stats, wins anything and it’s gotten dramatically better. That’s what I’ve been really excited about. I knew when we drafted him [that] he had a chance to be [one of the] top guys in the league.

“The kid’s come in — rookie of the year, back-to-back Pro Bowls. I think he takes criticism. I think some of [it] is unfair for some reasons I won’t get into. We know what he brings and every Sunday [when] we line up with him as the quarterback, we have a real chance at winning in a game.

“You see the market for these quarterbacks and what guys are getting paid,” Kingsbury said. “There’s very few [QBs] when you line up every Sunday and say we have a chance. Our guy is one of those that give you a chance. And at his best, I don’t know who’s better in this league.” [via Sports Illustrated]

With Murray now locked into a new deal, the pressure will certainly be on both him and Kingsbury to make a run in the playoffs this year. If they don’t, though, Kingsbury will likely be the one who loses his job over it now that the Cardinals are paying Kyler a whopping $46 million per year.

RELATED: NFL Fans Clown On The Cardinals For Officially Making Kyler Murray The 2nd Highest-Paid In The League