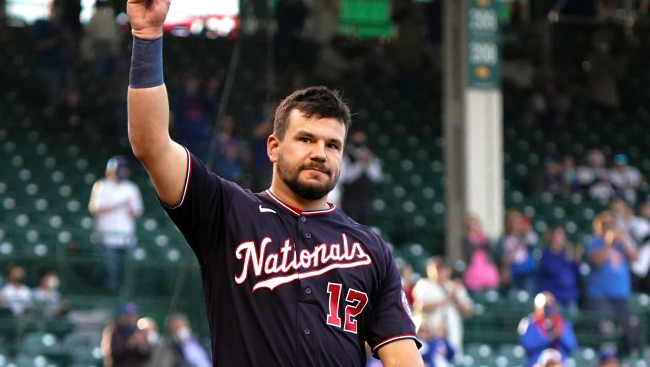 Washington Nationals slugger Kyle Schwarber played in his first game as a visitor when he returned to Wrigley Field on Monday for a game against his former team, the Chicago Cubs.

Little did he know that when he went out to his position in left field that his former teammate Kris Bryant had left him a little surprise welcome back gift: some candy.

KB left @kschwarb12 some candy on the field between innings lol pic.twitter.com/I9uF9oite5

After the game, Schwarber was asked about the candy and Bryant’s gesture.

“He did. He sure did,” said Schwarber. “Definitely ate a Twix out there on the field and it led to a hit. So I might have to eat a Twix tomorrow. It was really pretty good.

“I looked at him like, ‘Are you crazy, man?’ But it was funny gesture and he actually texted me after the game and I sent him a little shot back, but it was a funny little gesture there and, it’s just like I said, we form bonds, from what we did and just being able to play each other for so long and, you know, he gave me a good little jab there.”

Schwarber did more than get a hit following his Twix bar snack in left field. He hit his sixth homer of the season. Of course, as per Wrigley Field custom, the ball was thrown back onto the field.

“I was like, ‘They threw it back?’ But I was able to get the ball and I’m going to get it authenticated,” said Schwarber. “Definitely keep that as a keepsake.”

He also got a nice ovation before his first at-bat from the Cubs faithful, as well as a hug from former teammate Wilson Contreras.

Caps off to @Cubs fans for giving Kyle Schwarber such an incredible ovation.#CubTogether // #NATITUDE pic.twitter.com/Wli1Xr3hv0

Former Cubs pitcher Jon Lester also got a standing ovation when he took the mound at Wrigley in the bottom of the first inning and again later when he left the game.

Standing O for Jon Lester in his return to Wrigley. That was the signing that changed everything and they’ll never forget that. pic.twitter.com/wvS3GhwnP9

Jon Lester gets a standing ovation as he walks off the mound. #Cubs pic.twitter.com/XONgNj8tkH

Schwarber had been with the Cubs from the time he was the fourth player selected in the 1st round of the 2014 MLB June Amateur Draft, until signing a one-year, contract with the Washington Nationals this past offseason.

Both he and Lester, who also signed a one-year contract with Washington this past offseason, were big parts of the Cubs’ first World Series championship since 1908 when they won it all in 2016.