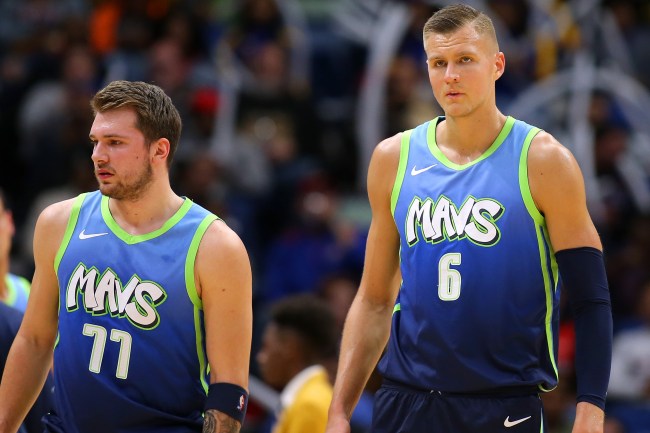 There’s some drama brewing in Dallas between Luka Doncic and Kristaps Porzingis.

On Sunday afternoon, the Dallas Mavericks were eliminated from the playoffs after losing game 7 to the LA Clippers despite a 46 point performance from Doncic.

A day after the game, ESPN’s Tim MacMahon released a report on the friction between Doncic and Porzingis this season. According to MacMahon,, a source close to Porzingis told him that the big man is frustrated playing alongside Doncic because Luka dominates that ball and the spotlight leaving him as an “afterthought.”

Then there are questions about the chemistry between Doncic and Porzingis. The Mavs’ franchise cornerstones admittedly aren’t friends, a distant dynamic that team owner Mark Cuban has compared to the early stages of the partnership between Dirk Nowitzki and Jason Terry, which ultimately produced two NBA Finals appearances and a championship.

But Porzingis has been frustrated, often feeling more like an afterthought than a co-star as Doncic dominates the ball and the spotlight, sources told ESPN.

Fans immediately mocked Porzingis over his reported feelings about Doncic considering many feel he hasn’t played well this year.

Maybe… play like a co Star? Not a bench warmer? https://t.co/J7FhbF3uBk

Should be “Porzingis frustrated that he’s playing like a sack of bricks and after some thought he’s considering requesting a trade to the local senior league where his would-be co-star uses a cane” https://t.co/By66ed1xn4

Maybe he should start by playing more like a co-star…. Wild idea I know. https://t.co/LjgZeaVGar

the lack of self awareness and accountability is wild https://t.co/ZdWw2JYNCW

That’s what happens when you play like a bum https://t.co/oW5pQEjB3I

Maybe if you were capable of making shots or played in the post you wouldn't be an afterthought https://t.co/IcdcbkDMiu