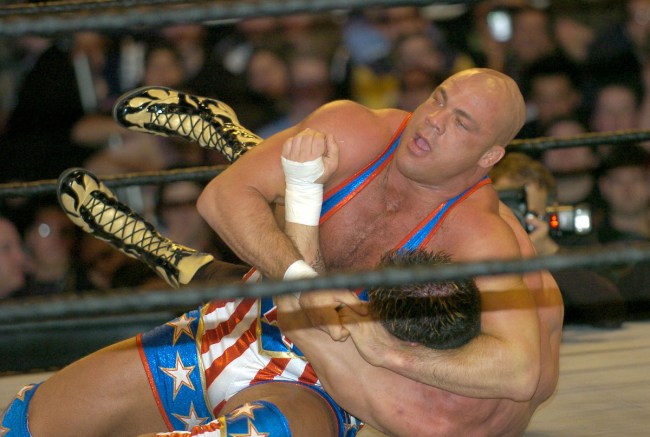 Accidents happen in the ring and getting hurt is just a part of being a professional wrestler. Even though most performers are careful, mishaps still occur, and wrestlers end up breaking arms, legs, or worse.

Kurt Angle doesn’t have the reputation for being dangerous in the ring but even an Olympic gold medalist can screw up sometimes. On a recent episode of “The Kurt Angle Show”, the WWE Hall of Famer opened up about accidentally breaking the arm of a former WWE star during a TV match.

During an episode of “Smackdown” back in 2000, Angle misjudged on a moonsault, and broke Bob “Hardcore” Holly’s arm with his shin.

“Oh yeah, I felt really bad. I wanted to make sure, when I hurt Bob, the problem was I didn’t practice the moonsault,” recalls Angle.

“I think I might have hit it one other time before that, and I never practiced how far out I would go. So, when I placed Bob in the middle of the ring, I went up really high, and I didn’t go far. I fell short, and my shins hit his arm, and he had a compound fracture. Both bones were completely broken.”

The moment Angle realized Holly’s arm was busted, he wanted to end the match, but the veteran performer refused.

Well, I don’t remember what’s next, so he is calling the match to me, and while we’re doing it, I’m grabbing his arm to shoot him off the ropes, and it’s his broken arm, and he’s like, ‘Oh s**t, you’re hurting me.’

Every time I would grab his arm and shoot him off, he would scream really loud, and it was really, you know, it was a hard match to finish.

He was injured, and I didn’t want to hurt him any more than he was. But Bob is a badass and he was going to finish the match regardless.”

After the match, and in the months that follow, Angle made sure to check up on Holly during his rehab.

“When I hurt him, I wanted to make sure he was okay.

I took care of him, I checked up on him, I took him to the hospital, I went and got him food.

For the next several weeks I called him, making sure he was okay.

I felt really bad about what happened, and I wanted him to know that I sincerely apologized.”

Angle explained that getting hurt is a tough blow for a performer and hurting Holly felt like “taking money away” from him.

“I wanted him to know that I was really, really sorry,” explained Angle.

[via The Kurt Angle Show]