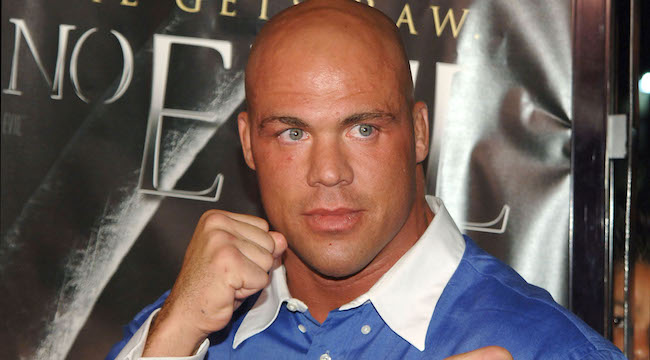 You won’t find a ton of people who will dub him the GOAT, but there’s no denying Kurt Angle has had one of the most impressive wrestling careers of all time. After breaking his neck and overcoming a Vicodin addiction in the mid-90s, he won a gold medal as an amateur wrestler at the Atlanta Olympics in 1996 before he went on to become one of the WWE’s top talents for close to a decade.

The technically skilled Angle defected to the TNA in 2006 and spent eight years as one of its top wrestlers before eventually moving on to stints in Mexico and Japan. After being inducted into the WWE Hall of Fame in 2017, he returned to the company as the general manager of Raw— a position he’s held for most of the year.

The WWE suffered a bit of a setback this week after multiple wrestlers were forced to withdraw from Sunday’s TLC: Tables, Ladders & Chairs match due to viral meningitis, and Angle has been called upon to fill the void left by Roman Reigns in the main event as part of the eagerly awaited reunion of The Shield.

This will be the first time Angle has stepped into the WWE ring in 11 years. The 48-year-old will face off in a 5-on-3 handicap match against Braun Strowman, Sheamus, The Miz, Cesaro, and Kane.

However, he is far from the oldest wrestler to compete in the WWE. In 2010, 87-year-old Mae Young won in a (literal) handicap match to secure her spot as the most senior competitor in the history of wrestling. I wish Angle the best of luck in making it to that age.