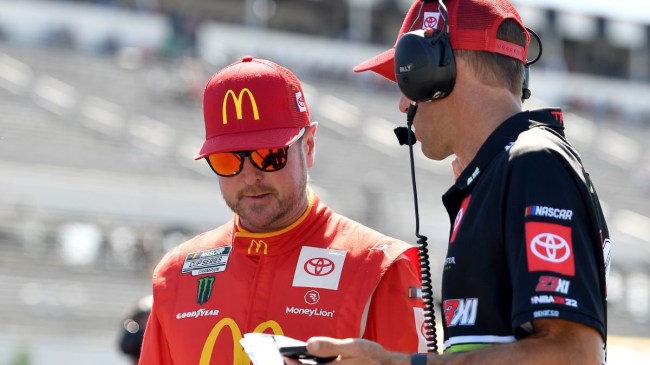 As the saying goes, where there’s smoke, there’s fire. And there’s been a lot of smoke surrounding the career of NASCAR Cup Series star Kurt Busch in recent weeks. The former series champion made huge news earlier in the season when he won his first race for Michael Jordan’s 23XI race team. That win locked 23XI into the NASCAR playoffs for the first time in just the team’s second year.

Unfortunately for Busch and co., they never actually got to begin the playoffs. Instead, the 44-year-old suffered a crash in qualifying at Pocono Raceway in July that left him concussed. He’s since missed a number of races while dealing with post-concussion syndrome and was forced to remove himself from the playoffs.

The crash, as well as several others this season, has come under strict scrutiny from drivers who claim the current cars are not safe. This is the first year NASCAR has run its “NextGen” car. The series provides all parts to the teams.

The smoke surrounding Busch’s career future got even thicker earlier this week when news broke that 23XI had bought out one of the series’ top young drivers, Tyler Reddick, for the 2023 season. That led to speculation that an announcement surrounding Busch would come sooner rather than later.

Busch called a press conference at 11 a.m. ET on Saturday ahead of the Cup Series’ weekend at Las Vegas Motorspeedway. What came next surprised nobody.

Speaking through tears, Busch announced that he will not drive full-time in 2023 and that he’s yet to be cleared by doctors following the concussion.

Kurt Busch is getting choked up while reading the statement he just put out on Twitter. Obviously a very emotional moment for him.

Though he did not rule out a partial return to the series if he’s eventually cleared.

Kurt Busch: "I've wrecked a lot of shit in my life. Over the years, things add up. Different wrecks this year have made it tough."

He also confirmed Reddick as his replacement going forward.

Kurt Busch on his decision to step aside for Tyler Reddick to drive the No. 45 car in 2023: "This is more of being unselfish and respecting what has to happen in this industry. … I will get back to 100%, I promise."

If this is the end for Busch, it’s no doubt the bow on what will eventually be a Hall of Fame resume.