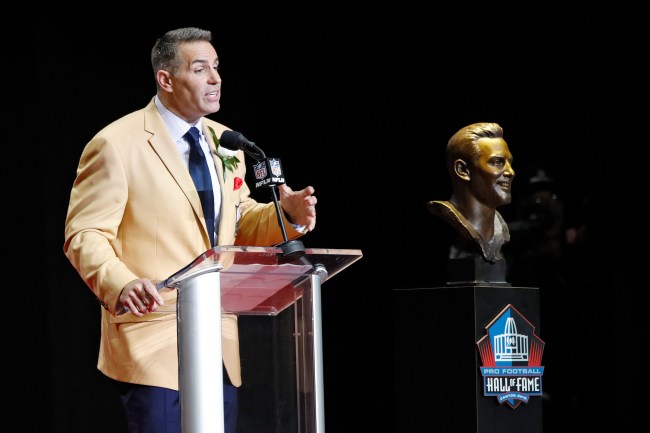 Kurt Warner’s a Hall of Fame quarterback who put up video game-like stats during his NFL career. Now an analyst on the NFL Network, the former signal-caller is lending his opinion for the channel by giving hot takes on typical debates which compare players in terms of greatness — because it’s the offseason and we all need something to talk about, right?

Here’s the problem, though: Kurt Warner is going a little bit too bold with his takes, especially when it comes to ranking his top-5 quarterbacks entering the 2019 NFL season. While this type of stuff is subjective, the former Super Bowl winning Warner’s list didn’t exactly get a warm reception from fans on social media, as he ranked Tom Brady first, Drew Brees second and reigning NFL Most Valuable Player Patrick Mahomes third. Take a look at Kurt Warner’s entire top-5 list right now.

1st NFLN says Montana isn't a top 10 QB and now they have MVP Mahomes, as only 3rd best QB entering 2019, behind Brees?

I understand putting Brady above him since Brady beat him twice last year and won the SB but Brees?

As mentioned, once Twitter got hold of Kurt Warner’s current rankings, they had a damn field day in response, with people laying into the guy. Here’s some of what people were saying online.

All this list proves is Kurt Warner is on the sauce

Why the hell is Dak even an option? That alone made this video laughable from the jump.

Ya Tom Brady beat the Chiefs twice last year, ok. In 2 games against the Chiefs, Brady threw 2 TDs and 2 INT's. In those same 2 games, Patriots RB's combined for 6 TDs with an average of 174 yards per game. So pleeeeease continue to tell me that "Brady beat the Chiefs". #Patriots pic.twitter.com/QgRUrpQ7RR

I think Kurt Warner tried to save face. He later said Russell was his number 6th, but his name wasn’t even in his list of Top 10 names Warner was picking from. SMH.

Then he says Brees was "neck and neck" with Mahomes for MVP only to add you "can't compete" with 50 TDs – Which one is it?

Kirk Cousins has the 9th best QB rating in NFL history, ahead of Joe Montana and Kurt Warner.

That’s all you need to know that QB rating is a crap statistic.

Look, it’s understandable that Kurt Warner’s playing the longevity card here by putting both Brady and Brees in his top two spots, while also having Ben Roethlisberger as his fifth-best QB right now — because, combined, the three have won nine Super Bowl titles. In NFL history, sure, Tom Brady’s the GOAT and nobody can even make much of a debate.

That said, when talking about going into the 2019 NFL season, leaving off younger guys like Mahomes, Russell Wilson, Andrew Luck and Jared Goff, among others, in the top-5 is just a bit extreme. Those guys have all proven themselves in the league, and football fans sure seem like Warner’s stuck in 2012 with where he ranks guys right now.