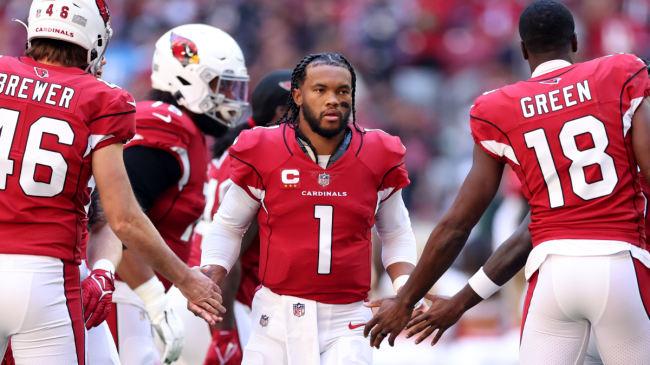 Kyler Murray took heat this week from a former teammate who called him a selfish player. The Arizona QB has now responded to those remarks, clapping back at his critic.

Patrick Peterson, who played for two seasons with Murray in the desert, trashed the Cardinals’ signal caller while speaking with his All Things Covered podcast co-host Bryant McFadden. The DB called Murray out for throwing head coach Kliff Kingsbury under the bus on numerous occasions this season.

“Kyler Murray don’t care about nobody but Kyler Murray. That’s just the matter of the fact.”

The Cardinals have struggled mightily this year, going just 4-8 through their first 12 games. Inconsistencies on offense have led to criticism of both Murray and Kingsbury. Rather than accept responsibility, many believe that the passer has pushed blame to the coaching staff. Those observers cite Murray’s comments following last week’s loss to the Chargers as proof, as he called out the offensive scheme for the failure to convert on a late play.

“No, that wasn’t for Hop, actually. Schematically, I mean… we were kind of f—ed.”

Kyler Murray’s taken offense to those notions, clapping back at Patrick Peterson on social media after hearing the segment.

The quarterback posted a message on Twitter to both deny the insinuation that he doesn’t care about his coaches or teammates, and also bash Peterson for trying to boost his podcast ratings.

“This isn’t true… You on some weird shit. You got my number, if you really felt like this as a ‘big bro’ or ‘mentor’ you supposed to call me and tell me, not drag me so your podcast can grow…”

Arizona is siding with Kyler Murray for the moment, showing their support in the form of a massive contract extension this past offseason. In order to stay in the good graces of management, though, he’ll need to shake these public opinions and get the Cardinals back to the playoffs.