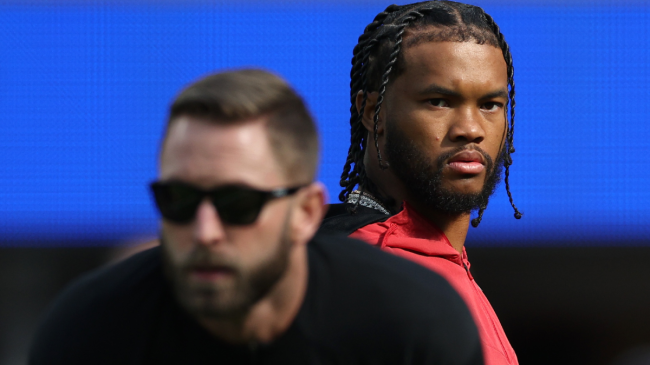 Former Cardinals star and current Minnesota Viking Patrick Peterson had some interesting commentary to give on the state of his old team. Those opinions directly target both the Arizona front office and quarterback Kyler Murray.

Peterson joined another NFL defensive back in Bryant McFadden for their All Things Covered podcast this week, and he blasted his former teammate during the segment. He didn’t hold back his thoughts on Kyler Murray’s leadership of the organization, calling the Arizona signal caller selfish for playing the blame game this season.

“Kyler Murray don’t care about nobody but Kyler Murray. That’s just the matter of the fact.”

Those comments are worrisome coming from someone that played with the passer for two seasons, particularly given the fact that the team just signed him to a massive contract extension over the offseason. Peterson’s statement comes in response to Murray’s lack of accountability amid the Cardinals’ struggles in 2022.

After making the postseason last year, Arizona has limped out to a 4-8 start. While some slim playoff hopes are still alive, they’ll need to be nearly perfect to make that dream come true. And it’s safe to say the Cardinals have been far from perfect thus far.

The offense has been wildly inconsistent, being held to 21 points or less in six of their 12 contests. Not surprisingly, they’ve lost each of those matchups. Much of the blame has been placed on the quarterback position, but rather than accept responsibility, Murray’s often been seen deflecting. He’s called out play calling and coaching on multiple occasions this season.

Most recently, he blamed the offensive scheme for a crucial miss in Sunday’s 25-24 loss against the Chargers. He’s also been seen visibly frustrated during on-the-field confrontations with his head coach.

Making Peterson more upset, he believes that the organization will side with Kyler Murray while showing Kliff Kingsbury the door.

“Ain’t no maybe, he will be [the scapegoat]. And the crazy thing about it, the guy who hired him will still have a job.”

He says that even his most recent contract extension won’t save him. If there’s someone that’s going to go this year, it will assuredly be Kingsbury.

Things have certainly not gone according to plan for Arizona in 2022, and it may be just a matter of time before we see the fallout of their subpar performance. One thing’s for sure, Patrick Peterson is glad to be playing with Kirk Cousins this season as opposed to Kyler Murray.

Related: Kyler Murray’s ex-hairdresser tried to expose him in a recent podcast