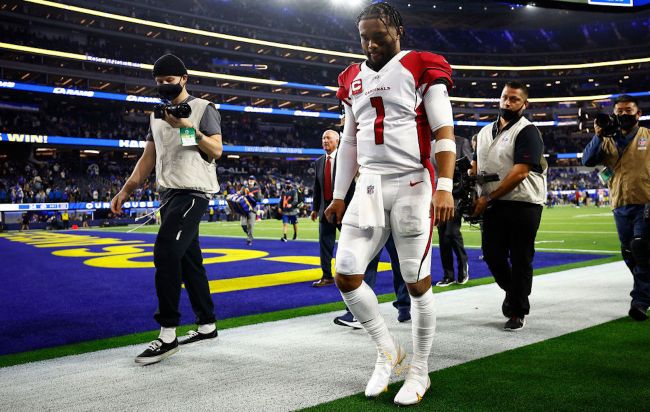 Hell of a season for Kyler Murray. Total rollercoaster.  On one hand, he was able to lead the Arizona Cardinals to the playoffs for the first time in his three-year career. On the other, including the playoffs (in which they got absolutely massacred by the Super Bowl-bound Los Angeles Rams), the Cards closed out their year with a 1-5 record in their last six games. Funnily enough, that lone win came over the Cowboys.

And despite the on-the-field success of the team, Murray as an individual regressed following his explosive sophomore season, as he threw for fewer completions, yards, and touchdowns this season compared to last. His effectiveness on the ground — whether that be due to offensive game planning or otherwise — also significantly regressed. In 2020, Murray rushed for 819 yards and eleven touchdowns. This year, though, those numbers fell to 423 and five, respectively. He also fumbled 13 times this year, a career-high.

Murray’s complicated season continued on Sunday, as he not only threw a pick-six in the early goings of the Pro Bowl, but he also apparently scrubbed his social media of all references to the Arizona Cardinals, the team that drafted him with the #1 overall pick in 2019. He also apparently unfollowed the team’s official accounts on both Twitter and Instagram.

Kyler Murray has removed all association with the Cardinals from his Instagram, per my own sight. With the 49ers looking to trade Jimmy, and Russell possibly wanting to leave, the NFC West is shaping up to possibly the Rams for a whole. #ramshouse #kylermurray

Maybe this is a hot take…

I don’t really care what is on Kyler Murray’s Instagram account, and he’s probably at home laughing at the “controversy.”

This is what happens when a perennially bottom-dwelling organization wastes their star QB’s rookie scale contract bc they were happy to have a midseason winning record twice in 3 seasons.

Changes MUST be made. Soon.

One interesting theory that has arisen in the wake of Murray’s social media antics is that he could be trying to force a trade to the Tampa Bay Buccaneers now that they’re in the market for a quarterback.

My 1st catch in a pro bowl lol appreciate it bro @K1 https://t.co/cTikbo0V9S

Kyler Murray just deleted everything off his Instagram relating to the Cardinals.

Now I see him and Evans flirting on twitter and IG????🤔

Wow. All it took was a couple of passes to Mike Evans for Kyler to begin his process of forcing a trade to the Bucs. https://t.co/YiN2vUGfcq

RELATED: Old Video Of Kyler Murray Laying A HUGE Hit At Linebacker In Pop Warner Will Get Your Blood Pumping