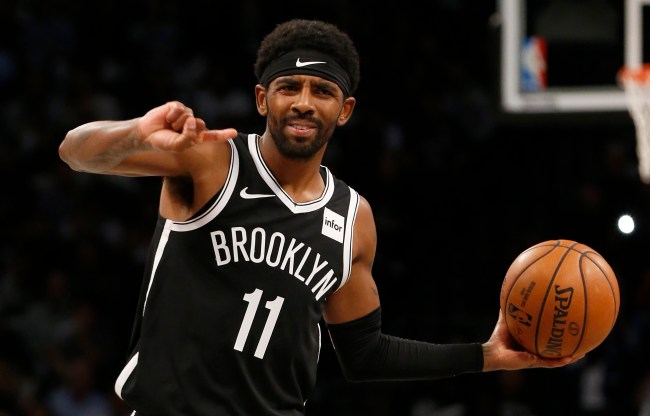 We’re barely two weeks into the NBA season and we might already have some Kyrie Irving drama. Early this morning, ESPN’s Jackie Macmullan released a report revealing that the Nets front office is being extra careful in how they handle Irving because they’re apparently worried the relationship could potentially turn toxic.

Irving, who has had issues with his last two teams, reportedly got off to the wrong off foot with the team when he straight up refused to participate in their two-day minicamp in the offseason.

THE Nets were delighted when their new power trio organized summer workouts for the team at a Los Angeles middle school in July and August. The aim was to develop chemistry and learn each other’s tendencies on the court. It was going swimmingly until Brooklyn dispatched its performance team to Santa Monica for an annual two-day minicamp with the players, which involved, among other things, gathering biometric data through wearables. Irving, who has spent the past nine years working with his own performance specialist, Robin Pound, balked.

When the Nets gently urged him to participate, he didn’t mince words: “I’m not doing it.” It created an awkward moment, team sources say, for incumbent players who had benefited from the performance staff and ingrained that input into their routine.

According to Macmullan’s report things got a bit awkward during the team’s trip to China when Irving had a mood swing which left everyone on the team confused.

Yet Irving’s infamous mood swings, confirmed by his ex-teammates, which followed him from Cleveland to Boston to Brooklyn, are the unspoken concern that makes Nets officials queasy. When Irving lapses into these funks, he often shuts down, unwilling to communicate with the coaching staff, front office and sometimes, even his teammates. Nets team sources say one such episode occurred during Brooklyn’s trip to China, leaving everyone scratching their heads as to what precipitated it. There’s hope that Durant will be able to coax his friend into a better frame of mind. But when presented with that scenario, KD says he will be hands off.

One bizarre incident during the team’s China trip involved Kyrie refusing to take off his hat during a photoshoot and instructing the team to photoshop it out later.

There has already been leeway to allow Irving to march to his own drum. The Nets are willing to look past moments like the photo shoot at the Pearl TV Tower in China, when Irving refused to remove his hat and instructed them to photoshop it out. They will focus more on the bigger issue of sharing the ball and maintaining good team chemistry.

While there’s no doubt that Kyrie is a diva he has shown in the first three games of the season that he was worth taking a risk on.