REPORT: Here’s How The Rest Of The NBA Currently Views Kyrie Irving 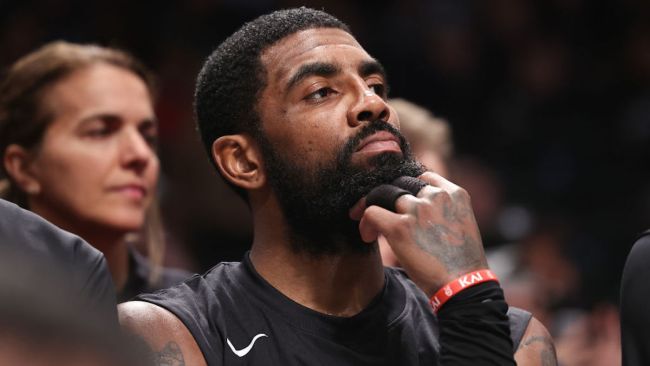 While Kevin Durant and Kyrie Irving might have tried to force a trade earlier this summer, that certainly won’t be happening now, especially when it comes to the controversial 30-year-old point guard, as his trade value is reportedly in the dumps.

Kyrie Irving is reportedly “radioactive” to other NBA teams, who apparently won’t trade for him regardless of the price due to his baggage

During a recent episode of his podcast, NBA insider and ESPN reporter Zach Lowe detailed what Kyrie Irving’s current value to the rest of the league is, and according to Lowe, it’s basically nothing as teams won’t trade for him regardless of what they have to give up to get him. Lowe also described Irving as currently being “radioactive.”

“I talked to a lot of people around the league over the weekend and the sense I get right now is he’s radioactive,” Lowe on his podcast The Lowe Post with Nick Friedell. “Even if you drop the price to nothing, the baggage is just too much.

It’s difficult to imagine where Irving’s career goes from here, as the former Duke University Blue Devil seems determined on burning every bridge he crosses. NBA commissioner Adam Silver, who is Jewish, certainly isn’t thrilled with Irving or his apology, as he announced in an official statement on Thursday that he plans to meet with Kyrie in the coming days.

At the time of this writing, the Nets are currently without a head coach — although reports indicate they’re going to hire suspended Celtic Ime Udoka — and sit in 13th place in the NBA’s Eastern Conference with a 2-6 record.

Speaking to reporters on Thursday, Irving once again failed to properly apologize for his action as he said: “I cannot be antisemitic if I know where I come from.”

Kyrie Irving is asked if he has any anti-Semitic beliefs: pic.twitter.com/hHI8FFqMbs

RELATED: Kyrie Irving Releases Weak Official Statement In Tandem With The Nets, Will Donate $500K Of His $36M Salary To Charity