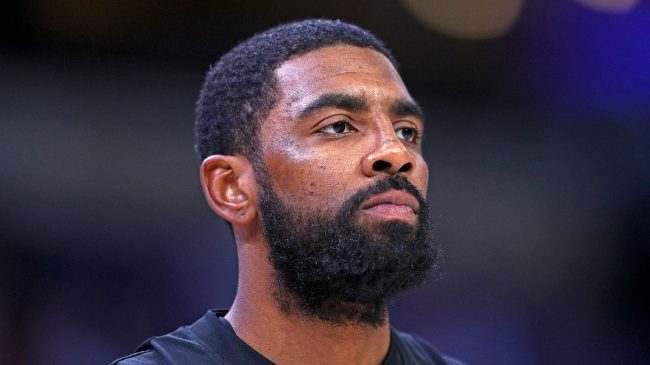 The Brooklyn Nets PR team is just going through the gauntlet right now. This is the most dramatic team in all of sports and of course, Kyrie Irving sprinkles more drama onto an already controversial subject. On Thursday, the Brooklyn Nets guard was asked a layup question by the media and he still found a way to fumble it.

Kyrie Irving Somehow Fumbles The Easiest Question Of All Time

According to Nets Videos, Irving was asked point blank if he “has any anti-Semitic beliefs?” You’d think Kyrie Irving would rattle off a quick “no.” Instead, he shrugs his shoulders and begins talking in circles. The media gives him another chance to just say “no” by repeating the question. Then the Nets’ star gives the weirdest answer ever. “I cannot be anti-Semitic if I know where I come from.”

Kyrie Irving is asked if he has any anti-Semitic beliefs: pic.twitter.com/hHI8FFqMbs

Kyrie Irving’s agent (who happens to also be his stepmom) has to be slamming her head against the wall. Irving was given three chances to just straight up say “no” to being an anti-Semite. Instead, he dodged the question and spoke in circles like an American politician.

This is truly a bizarre moment of time we’re in. Sure, Irving is donating money and shared a joint statement with the Nets. However, he has yet to apologize for his comments while also fumbling the easiest question ever.

Who knows how this will play out? NBA Commissioner plans to sit down and talk with Irving and maybe that will be beneficial. However, we won’t know until more information is brought to light about that conversation. Until then, the Nets guard remains in hot water.