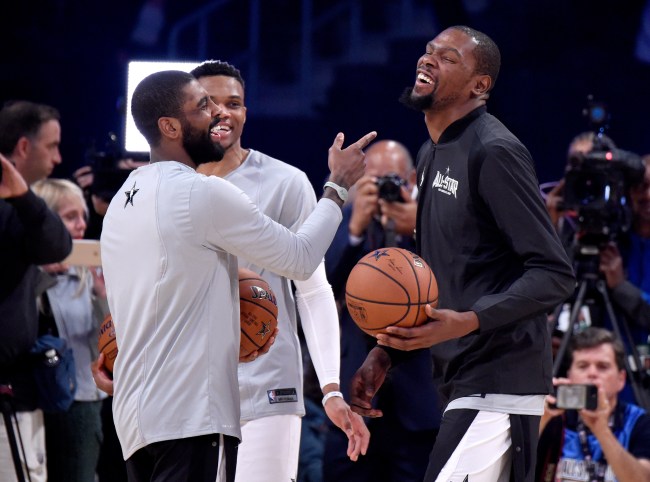 The Kyrie Irving and Kevin Durant to the Knicks rumors are hot and heavy this week and Kyrie doesn’t too thrilled with all of the speculation surrounding his relationship with one of his best friends.

Just a few days ago, the two NBA superstars made headlines when they were seen having a candid hallway conversation during the All-star game that many fans believed showed Kyrie trying to convince Durant to sign with the Knicks.

Kyrie spoke to the media today about the video and he seems pretty annoyed about the rumors that he’s teaming up with KD.

Kyrie on video with Durant: “It’s a video of me and one of my best friends talking. And then it turns out to be a dissection of a free agency meeting? Do you get that? Like, do you get that? And then I’m asked questions about that? That’s what disconnects me from all that shit.”

Kyrie's reaction when asked about his viral conversation with Kevin Durant #Celtics pic.twitter.com/OHeqvlCS8u

Kyrie’s response comes hours after fans circulated a picture of him and Durant apparently hanging out in Miami during the All-star break.

Kevin Durant and Kyrie Irving spotted in a Miami restaurant together 👀 pic.twitter.com/qTdL35x4UI

Irving and Durant seem annoyed by all the conversations surrounding their free agency this year but they kind of put themselves in this awkward position by not immediately signing long-term contracts.