Kyrie Irving Reportedly Hung Out With LeBron James In L.A. As Rumors That LeBron Is Trying To Recruit Him To Play For Lakers Heat Up 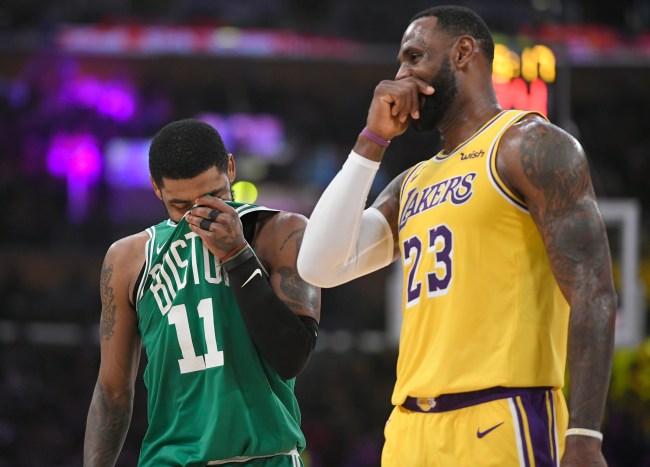 LeBron James is in full on recruitment mode and appears to be holding meetings to try and get superstar players to come play with him in L.A.

So far LeBron has reportedly spoken to Kawhi Leonard and Jimmy Butler about coming out West to join him.

LeBron the Recruiter has his eyes set on Kawhi Leonard & Jimmy Butler.
(via @SportsCenter, @WindhorstESPN)pic.twitter.com/P3CXHiZDJ2

From what I understand, he has already begun the recruiting process,” Windhorst said. “I’ve heard he’s had contact with Kawhi Leonard. I’ve heard he’s had contact with Jimmy Butler. There’s no tampering enforcement by players. And while Magic Johnson, the guy who got in trouble for tampering before, is no longer there, LeBron is ‘tamperer in chief’ of the Lakers right now. The thing about it is, I don’t know if texts and calls, and maybe a dinner with LeBron, is enough for the Lakers to overcome their hurdles that they’re gonna have.”

Apparently, LeBron has also met with Kyrie Irving who is in L.A. this week.

Kyrie Irving was seen with LeBron at Hyde in LA on Saturday. https://t.co/5HdVUECJOj

According to ESPN’s Brian Windhorst Kyrie is “considering” joining LeBron and the Lakers next season despite other reports saying the opposite.

“Six months ago I would have told you that the concept of Kyrie to the Lakers would have gotten me to hang up the phone on you. Now, from what I understand, the door is at least open. I wouldn’t say he’s stomping through it, I wouldn’t say that it’s likely, I wouldn’t say that I think that’s going to be a thing we’re going to see. I still think New York and Brooklyn are higher on his list, but I think Kyrie is considering the Lakers. He’s had some conversations with some people and I know he’s in touch with LeBron, and LeBron’s going to make a run to recruit him.”

Windhorst on Kyrie Irving & the Lakers: "I think Kyrie is considering the Lakers… I know he's in touch with LeBron & LeBron's gonna make a run to recruit him." pic.twitter.com/wcUMNhgRGy

Update: LeBron liked this photoshopped pic of Kyrie in a Lakers jersey.

I highly doubt LeBron is going to be able to recruit any superstars to L.A. considering the dysfunction going on in the Lakers front office but it does look like he’s trying his best to form a superteam despite the circumstances.