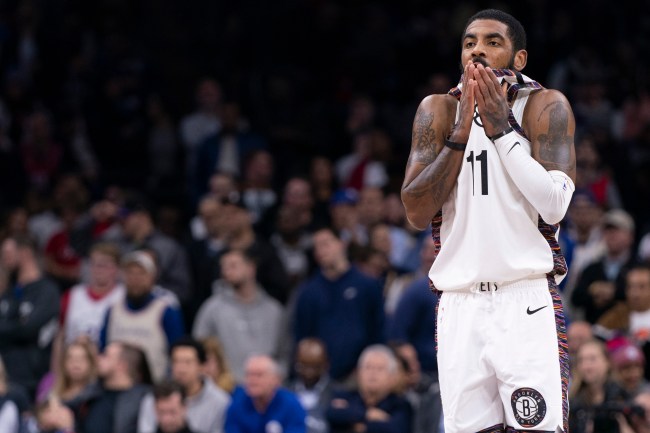 June 30, 2019: Kyrie Irving signs to the Brooklyn Nets, a team with one winning season in its last five, and the other guy who signed the largest contract in Nets history and is chewing up nearly $400 million in salary through 2023, is out the entire season with an Achilles tear.

Literally Everyone: Damn, the Nets are going to suck again this year.

January 15, 2020: Kyrie Irving, just days after returning from injury. The Nets fall to 18-22 after losing to the Sixers Wednesday. Kyrie had a crazy efficient game (21 points in 20 minutes on 10-11 shooting). Still, his success rarely translates to team success.

Kyrie: We are who they thought we were and instead of building a culture while I wait for the BEST PLAYER IN THE WORLD to return, lets get petty to the media about how I get no help.

“I mean, it’s transparent. It’s out there. It’s glaring, in terms of the pieces that we need in order to be at that next level,” Irving told reporters after the loss.

No no no dude. Less focus on that, more on this:

Ok, Kyrie. We can turn this around. Say something like ‘those are my brothers in the locker room’ or ‘it starts with me.’ Whatever you do, don’t bring up ‘the summer.’

“I’m going to continue to reiterate it. We’re going to do the best with the guys that we have in our locker room now, and we’ll worry about all the other stuff, in terms of moving pieces and everything else, as an organization down the line in the summer.

“It’s just something that we signed up for. We knew what we were coming into at the beginning of this season. Guys were going down left and right for us. [Garrett Temple] is out, [DeAndre Jordan] just got hurt tonight, Wilson [Chandler] is just coming back. We have complementary young guys as well that have done a great job the last three years.

I got an idea, lets alienate 60% of the team by elevating a small club of popular guys.

“Collectively, I feel like we have great pieces, but it’s pretty glaring we need one more piece or two more pieces that will complement myself, [Kevin Durant], DJ, GT, Spence [Dinwiddie], Caris [LeVert], and we’ll see how that evolves.”

Kyrie, I bought your shoes when you signed with Boston. Defended you to the point of irrationality. I’m done. It’s about time I accepted the love my mother says I deserve.