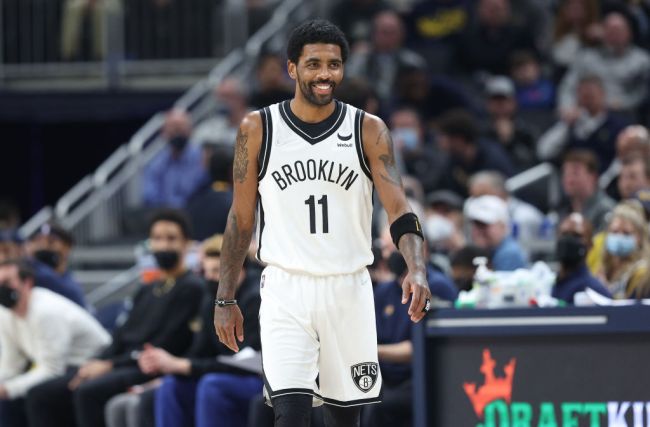 The NBA’s number one villain or number one hero — depending on your perspective and also how you feel about LeBron James — made his return to action on Wednesday night, as Kyrie Irving took the floor with the Brooklyn Nets for the first time all season.

Taking on the Pacers in Indiana, Irving suited up for the first time this season and dropped 22 points, four assists, and three rebounds in 32 minutes of action during the Nets 129-121 win over the Pacers.

Following the game, Irving shared an emotional moment with his father Drederick Irving, who was on hand to see his 29-year-old son play in an NBA game for the first time since last season, as Irving sat our the first 3 months of the 2021-22 season due to his inability to play in the Nets’ home games as a result of New York City’s vaccine mandate.

Kyrie gave his dad, Drederick, his jersey after the game ❤️ pic.twitter.com/acQV7dgagh

Following the game, Irving expressed an appreciation for being able to do what he loves again while speaking to reporters:

“Just a lot of gratitude just to be present tonight with everyone,” Irving said. “Just go out there and have fun doing what we love to do. It was a not-so-good first half for us, and we came in the locker room and we knew that in order to build this identity that we want to have later in the season we got to start now.”

Irving was also asked if his stance on getting vaccinated could change down the road:

“Man, I’m just taking it one day at a time… I think everybody’s feeling it, so I don’t want to make it simply about me and someone lessening the rules for me. I know what the consequences were, I still know what they are, but right now I’m just going to take it one day at a time like I said and just enjoy this time I get to play with my guys. And however it looks later in the season, then we’ll address it then.”

The Nets are home for their next two games, which means that Kyrie won’t be able to play. His next game will likely be on Monday, January 10, when the Nets visit the Portland Trail Blazers.