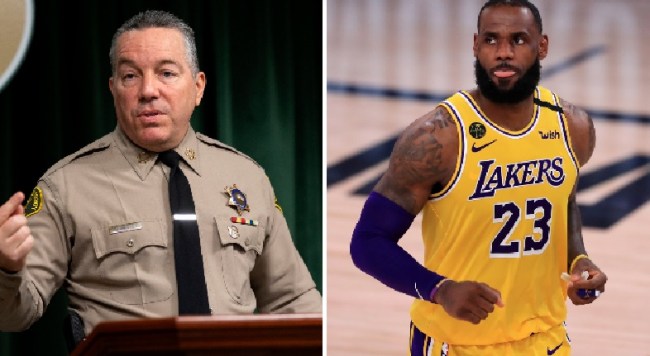 Los Angeles County Sheriff Alex Villanueva has challenged Lakers superstar LeBron James to match and double the reward money being offered for information that helps arrest the gunman who ambushed and shot two deputies over the weekend in Compton.

While speaking to John Phillips of 790 KABC radio Villanueva challenged LeBron to double the $175k already being put up between the county ($!00k) and private citizens ($75k) to catch the shooter.

This challenge is to Lebron James. I want you to match that and double that reward,”. “I know you care about law enforcement. You expressed a very interesting statement about your perspective on race relations and on officer-involved shootings and the impact that it has on the African-American community.

“And I appreciated that “But likewise, we need to appreciate that respect for life goes across all professions.”

During a press conference on Monday night, Villanueva called for athletes to stop “fanning the flames of hatred” and start putting “trust in the system.”

In this clip, @LASDHQ @LACoSheriff says athletes, elected officials and civic leaders need to emphasize trust in the criminal justice system, rather than “fanning the flames of hatred.” pic.twitter.com/sC5EG6gJVV

They’re out there doing their job and yet we have people fanning the flames of hatred and just turning up the volume when we don’t need it. We need to be turning it down,” Vi “Particularly our elected officials and civic leaders and sports figures, they need to start emphasizing trust in the system, due process.”

LeBron James did not immediately respond to Villanueva’s challenge.