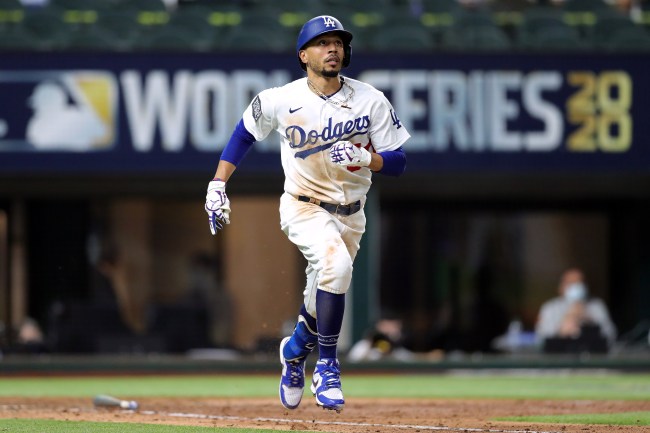 Mookie Betts had himself an impressive game 1 of the World Series and Red Sox fans are forced to wonder what could have been.

Back in February, the Red Sox shockingly traded away Betts to the Dodgers for a slew of prospects after they couldn’t come to a contract agreement with him.

Betts would go on and sign a huge 12-year $365 million contract with the Dodgers which appears to be paying off for the team.

During game 1 of the World Series vs the Rays, Betts became the first player in World Series history with 2+ steals, a homer, and 2+ runs in a single game

Betts also joined Babe Ruth in the history books and became the second player to have a walk and two stolen bases in an inning.

Mookie Betts is the 2nd player in World Series history with a walk and multiple stolen bases in an inning, joining Babe Ruth in 1921.

Ruth did so in the 5th inning of Game 2 of the 1921 World Series against the Giants. pic.twitter.com/wN6fQaO9sk

Baseball fans immediately mocked the Red Sox for letting go of a generational talent like Betts.

Mookie Betts steals 2 bases and has a walk in same inning of World Series game-only one other player ever did that-Babe Ruth. Both after they were traded from Red Sox

At least the Red Sox now have the payroll flexibility to someday, perhaps, sign a player who’s not as good as Mookie Betts.

Red Sox fans listening to the broadcast talk about how good of a player Mookie Betts is. pic.twitter.com/6k4oqMrgRs

the red sox also traded both of them https://t.co/KDzpAo41sZ