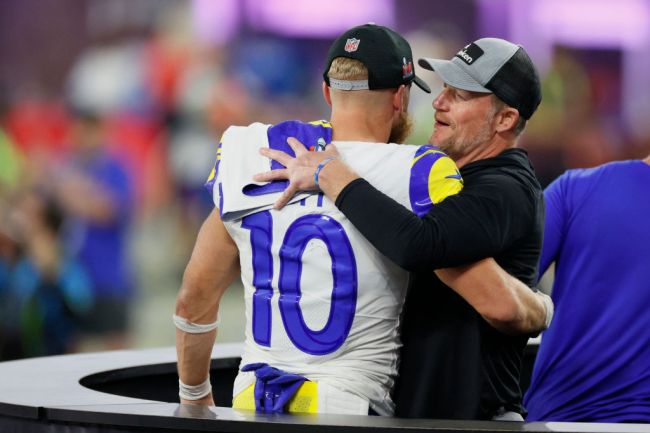 As the LA Rams celebrate their Super Bowl win, it’s hard not to think about everything it took for them to get here.

There was the run that came just short a few years ago with Jared Goff at quarterback. There have been a slew of trades to acquire veteran talent. The Rams swapped Jared Goff for Matt Stafford. Then they signed Odell Beckham after his split with the Cleveland Browns.

Some of the moves along the way were met with scrutiny, especially with the quantity of draft picks the Rams gave up along the way. At today’s Super Bowl parade, the team’s General Manager, Les Snead, wore a shirt that perfectly encapsulated his approach to win the Super Bowl.

He couldn’t have chosen anything more fitting. The LA Rams haven’t made a pick in the first round of the NFL draft since they selected Jared Goff in 2016.

They gave up their 2017 first to move and draft Goff in 2016. Their 2018 first rounder was used to acquire Brandin Cooks. In 2019, they repeatedly traded back and used part of their pick haul to acquire Marcus Peters and Dante Fowler.

Their 2020 and 2021 first rounders were used to acquire star cornerback Jalen Ramsey. The Rams have also given up most of their picks for the foreseeable future. They traded their first rounders in 2022 and 2023 as part of the Matt Stafford trade.

They traded their 2022 2nd and 3rd for Von Miller. Their 2022 4th went to the Texans in the Cooks trade. The Rams also don’t own their 4th next season because of the Sony Michel trade.

If the Rams had fallen short this season, there would have been a ton of questions about how their draft picks have been handled in recent years. Instead, the strategy paid off this season and made Les Snead look like a genius, making his shirt absolutely perfect for the occasion.